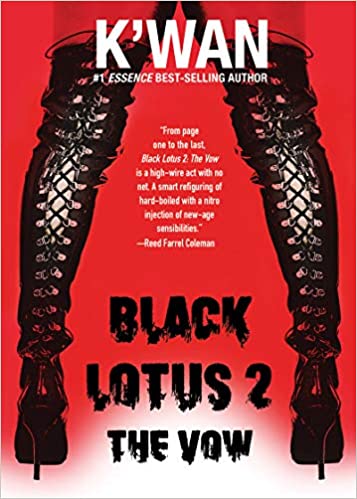 When K’wan’s Black Lotus 2: The Vow begins, the titular assassin (née Kahllah El-Amin) has severed all ties with the Brotherhood of Blood and is partnering with her best friend, Audrey, to publish a magazine called Real Talk. Kahllah knows that someone wants to lure her out of retirement; she’s seen the ciphered messages that keep appearing in the Village Voice’s personal ads. She’s done dealing in death, though, and assumes her would-be client will eventually give up and find another killer-for-hire. Then a notoriously crooked cop, Frank Cobb, is found dead in an alleyway alongside Kahllah’s old calling card—a genetically engineered black lotus. The NYPD orders tenacious detective James Wolf to bring her in, as he used to be an ally to Black Lotus. But when he turns up at Kahllah’s office, she runs, determined to restore her alter ego’s honor by finding the true culprit and bringing him or her to justice. Meanwhile, a crew of headline-making criminals wearing animal masks and wielding impossibly high-tech weapons causes Kahllah to wonder whether some of her old enemies are less dead than she was led to believe. K’wan follows up 2014’s Black Lotus with another furiously paced work of urban pulp that fuses 1970s camp with violence, vengeance, and gore. Series newcomers may need a beat to familiarize themselves with the battle-scarred characters and their blood-soaked backstories, but come the closing cliff-hanger, they’ll be every bit as invested in Kahllah’s future as K’wan’s longtime fans.