Books
In a Midnight Wood 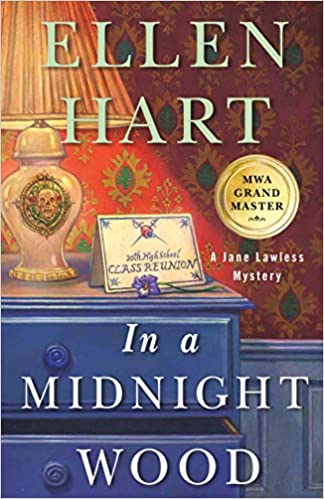 Jane Lawless and her best friend Cordelia Thorn are supposed to be headed to Castle Lake, Minnesota, for a week’s getaway. There’s an art festival they are taking part in, as well as an old friend, Emma, to visit.

But just before the duo arrive in town, things take an ominous turn when the body of a long-missing man is discovered in someone else’s grave. Sam Romilly was Emma’s high school boyfriend and during their senior year, he simply disappeared. The assumption that he had run off to get away from an abusive father is turned on its head when his body turns up.

Since Twisted at the Root, the previous book in Ellen Hart’s long-running series, Jane has gone through personal and professional upheavals that leave her with secrets of her own, including things she hasn’t even told Cordelia. She’s mostly stopped taking cases as a private investigator and has seemingly embarked on a third career as a true crime podcaster. The show focuses on Minnesota cold cases, and the death of Sam Romilly is of both personal and professional interest.

As Jane, accompanied by the irrepressible Cordelia, digs into the case, she uncovers a lot of small-town secrets and quite a number of suspects. Another seemingly unconnected murder ups the ante for Jane, who finds herself targeted by the real killer, who wants nothing more than to bury the truth the same way they buried Sam those many years ago.

The non-investigatory scenes in the book with Jane, Cordelia, and their supporting cast make for intensely likable reading (Jane in a diner filled with MAGA hat–wearing customers is priceless). But the overabundance of time spent on Castle Lake citizens seems, at times, to leave Jane a bystander in her own story.

Ellen Hart shows readers that small-town life can have a dark and seamy underbelly to rival any you’d find in a big city. Hart makes reading about the lengths desperate people will go to hide their misdeeds captivating.