(Mystery Scene continues its ongoing series in which authors talk about their plots, characters or process.) 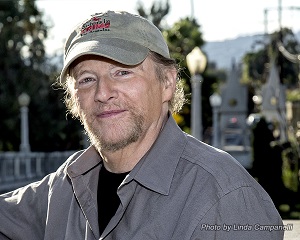 Marks’ latest novel The Blues Don’t Care (Down & Out Books) is partially set at the Club Alabam and Dunbar Hotel in L.A. during World War II. In The Blues Don’t Care, white musician, Bobby Saxon, who performs in an all-black jazz band, works to solve a murder and clear his name under extraordinary racially-tinged circumstances.

In this essay, Marks talks about his love of Los Angeles and he researches the city that is the setting for myriad mysteries.

The Research Time Machine
By Paul D. Marks
Anyone who knows me knows I’m obsessed with Los Angeles, past and present. L.A. history. L.A. culture.

I was born here and go way back on one side of my family. I write a lot about it in both fiction and non-fiction and it’s been said that L.A. is its own distinct character in my work.

I’m also into the 1940s, film noir and the big band/swing music of the era. 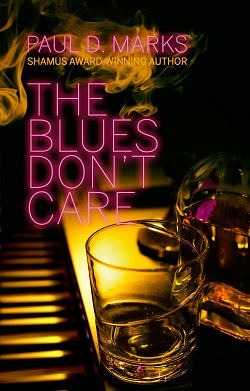 So it really wasn’t a stretch to write a novel set on the L.A. home front during World War II.

The Blues Don’t Care is about a young piano player named Bobby Saxon who wants to play with the house band at the famous Club Alabam on Central Avenue, the heart of black life in L.A. If Bobby gets the gig he would be the only white player in the otherwise all-black band.

And though it was before my time, I know a fair amount about the 1940s.

But I’ve never been to the Club Alabam (it was long gone before I ever heard about it) or the legendary Dunbar Hotel next door, where well-known African-American entertainers, politicians and others stayed when they weren’t allowed to stay at most hotels.

I never played piano in a hot jazz band. I was never the only white guy in an all-black band. And I never wore a fedora or smoked Lucky Strikes.

To get the era and its people right there are the usual suspects, er, sources. Books, the internet, photos. Movies and music from the time period. But there are also some other maybe overlooked approaches which I’ll get into later.

Movies and Music
I understand that movies aren’t reality, but watching the movies and listening to the music of a particular era can help give you an appreciation for the zeitgeist of that era, especially if it was before your time.

Some of the movies that were helpful were The Maltese Falcon, Mrs. Miniver, Stormy Weather, Waterloo Bridge (1940 version) and many others. They often depict the uncertainty of the times and the sacrifices that people made.

Also, the film noirs that started really taking off around 1944 with Double Indemnity offered their bleak, dark view of the world.

It’s said that film noir was a reaction to the harsh realities of the war, which makes perfect sense. Noirs such as The Woman in the Window, Murder, My Sweet and others are good examples.

While working on The Blues Don’t Care, I would also play swing music and listen to popular songs of the time, like We’ll Meet Again by Vera Lynn, I’ll Be Seeing You by Bing Crosby, as well as versions by Sinatra, Billie Holiday and others.

And Take the A Train, Duke Ellington’s great song, In the Mood by Glenn Miller, One O’Clock Jump by Count Basie, Sing Sing Sing, by Benny Goodman, Boogie Woogie Bugle Boy and Don’t Sit Under the Apple Tree With Anyone Else But Me by the Andrews Sisters.

And this doesn’t even begin to scratch the proverbial surface.

There’s just something about listening to the music of an era that can really take you back in time.

Books
Sure, they’re old-fashioned. But still valuable sources of info.

Even with the internet the old Time-Life series This Fabulous Century is very useful. The books are broken down by decade and give a variety of info about each decade.

The one from the 1940s came in handy. There are also many other books about the home front during that time period and also on specific areas like L.A. history and Central Avenue in particular.

Fiction is also a good source.

I love to read David Goodis, whose novels were made into movies like Dark Passage, which came out right after the war.

Chester Himes’ If He Hollers Let Him Go sets you down in L.A. during the war, a time of racial injustice, and makes you feel as if you are there.

Reading books written in the era can provide insight into what life was like and what people were thinking about.

Internet
There are tons of places on the internet on all kinds of subjects, but some certainly aren’t fact-checked so you might want to check more than one source. Another problem is that so many of them just copy from each other, so if the origin source is inaccurate so are the ones that copied it.

Some of the things I found useful to look up on the net were things like “how much did a pack of cigarettes cost in 1943?”

Or what car models were made during the war.

Trick question. During WWII the automobile industry converted to war production so cars weren’t being manufactured. That little fact led me to make sure that the cars I chose for my characters were realistic for the time period—for example there were no new civilian cars from 1942 to 1945.

It was also helpful to look up what clothes men and women wore, what types of hats, gloves, and hairstyles were in fashion. Also, what items were scarce during the war, like nylons. Instead of nylons women “painted” a stripe on the back of their legs to imitate the stocking seams of nylons from the era.

First-Hand Research
Another source that worked out for me on this particular book was first-hand sources. My mom and her friends remembered much of that era and much of L.A. from their childhoods.

They were a great source for things that one generally doesn’t find in books or on the net.

Also, my friend Clyde Williams, African-American artist and cowboy, who had exhibited at the historic Dunbar Hotel, was a great source. He turned me onto some old-timers from the era and the neighborhood, who helped add verisimilitude.

There are still many buildings and neighborhoods in Los Angeles that were around in the 40s that you can visit and imagine what they were like back in the day. The much-admired Bradbury building, the Dunbar (which is now a museum and senior housing). Central Avenue itself.

Maps
One source that you may not have thought of that’s extremely useful is maps.

Things change, streets change. And, of course, there were no freeways back then.

So how would I get my characters from Los Angeles to Long Beach in pre-freeway times? I looked on the net, but my best sources were old L.A. area street maps that I bought on eBay. They not only helped me with the route to Long Beach but with several other geographical issues.

On top of that they were fascinating and I probably spent way too much time just looking at them.

The Human Experience
Writers have to be able to empathize and put themselves in the place of their characters.

As human beings we have shared experiences. I may never have experienced certain things, but I can imagine what it was like and try to express that through my characters.

I can draw on my own experiences and emotions as a human being. What must it have been like to live in that society at that time? How would that character react to this situation or relate to that person?

Sometimes it’s not pleasant and sometimes we have to stretch ourselves to try to understand what would motivate certain actions. But those crucial details are what can make a novel richer and more layered and complex.

***
When all is said and done, a well written novel will never seem like it was researched at all. It will seem like the writer lived it and is writing about their own experience and you will join them there.