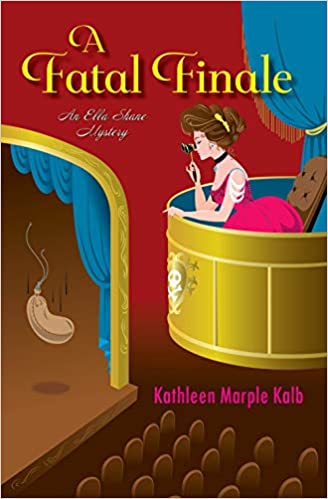 Ella Shane is an opera singer, known as a “trouser diva” because she sings men’s roles. As Kathleen Marple Kalb’s sparkling debut novel opens in 1899 New York, Ella’s singing Romeo to an overeager Juliet, but unfortunately Juliet actually dies at the end of the penultimate scene.

And from there, A Fatal Finale hits the ground running, with lively storytelling, a great milieu, and wonderful characters.

When the Duke of Leith, the victim’s cousin, turns up wanting to know more, Ella and the Duke form a sort of detection alliance to try to puzzle out exactly what happened to Juliet (aka Violette), who was officially presumed to be a suicide. Little pieces of the puzzle fall into place throughout the book, and the mystery unfolds slowly.

But while Ella is making her investigative discoveries, what’s so interesting about this book is the music, Ella’s love of it, and the mechanics of running an opera company. Opera companies were still focused on touring in 1899, as the Met was still new. There are backstage lotharios bearing sweaty bouquets, society matrons wanting Ella to sing “Ave Maria” at their musical afternoons, and a whole array of dressers, managers, and of course, other singers.

In addition to its mystery and its music, this book is an examination of the changing roles of women in 1899. Women’s suffrage is in the air and there are musings on the movement by most of the characters. Ella herself is unusual in that she has a successful career (playing men, no less) and no desire to marry (although she’s fond of children). Another interesting character, a female reporter who yearns to cover sports or news but is forced to write about hats, plays a helpful role in solving the mystery of Violette’s death.

Meanwhile, Ella and the Duke draw closer and closer as friends and maybe more. Ella’s determination to stay married to her career seems to be wavering, but she still wants a mate who would accept her career.

This is all told in the freshest, most delightful manner possible. Kalb may be a debut author, but her storytelling skills are already top-notch. The characters, from landladies to cousins to dukes, are all memorable. The mystery and method of Violette’s death is original. There’s even some swashbuckling swordplay. (Ella keeps in shape through fencing and riding her velocipede—that’s bicycle to you.)

The book ends with a magnificent theatrical scene that ties the story threads together in a very satisfactory fashion. Fun, romance, swordplay, music, and a well-done mystery take the stage for an outstanding debut. Brava!