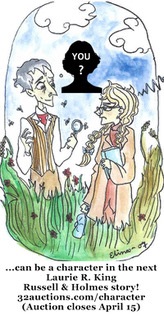 Many authors donate the naming of a character in their novels for charity auctions. It is one of the most popular items at auctions at mystery conferences where the bidding can reach into the five figures.

I remember one Bouchercon in which a character name in a bestselling author’s novel went for $10,000. Another time, the bidding was down to two people, each offering more than $7,000. That generous author offered both a character name if each bidder contributed $7,000. (No, not naming the authors—let that remain a mystery!)

The money usually goes to literacy programs, so everyone wins.

But sometimes offering a character name may not work.

The last time Laurie King offered a character name at auction in one of her Mary Russell-Sherlock Holmes novels was The Language of Bees, which came out in 2009.

“It can be really tricky to fit them into historical novels,” said King.

King is running a fundraiser for Second Harvest, an organization that is holding drive-by food banks during the pandemic. The California organization serves hundreds of families and is stepping up its projects.

“I haven’t donated a character name in many years, but I’m doing one for them,” King said.

The character name will appear in King’s novel scheduled for the summer of 2021. This book will take place immediately after Riviera Gold, which comes out in June 2020. The next novel will be set in the summer of 1925, and the setting will be Transylvania—a setting alone conjures many ideas. 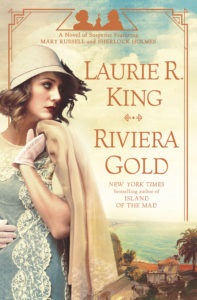 The character name could be anything, or any animal. King makes no promises, but she did say she would consult the winner along the way.

And for those waiting for Riviera Gold, it takes place on the Riviera during the summer of 1925 and the Jazz Age is in full swing. This is the landscape in which Mary Russell and Sherlock Holmes arrive.