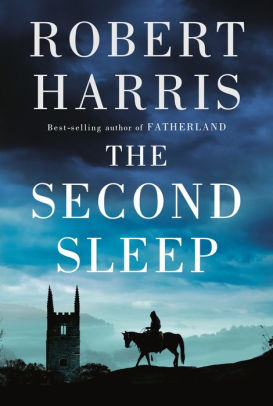 In The Second Sleep, Robert Harris turns his formidable talent for writing compelling novels about mysterious and original subjects to a dystopian post-technological world where the Church is the law and its only guidelines are superstition and fear.

A young priest, Christopher Fairfax, is sent to the small rural village of Addicott St. George to perform the funeral rites of Father Lacy, the local parish priest who died in a fall. When Fairfax arrives, he discovers a set of heretical tomes belonging to the late priest from the outlawed Society of Antiquaries—a group determined to find the truth of the past through archaeology and science. At Lacy’s funeral a stranger asserts that Lacy’s death was intentional. Much like Lacy’s heretical books, murder is something Fairfax would rather not consider. But when he is trapped in Addicott by a storm, Fairfax becomes an unwilling investigator into Lacy’s death and the much larger questions surrounding it.

The Second Sleep is a satisfying novel on multiple levels. It has the flash and bang of a thriller—mystery, suspense, and intrigue—and its ideas are poignant and thought-provoking, especially in our current climate when liberal democratic ideals are seemingly under assault from an international populist movement. It details a second Dark Age brought about by human fear and hubris, but the story is played as a tight mystery whodunit that flawlessly plants clues many readers may miss the first time around. The Second Sleep has appealing characters, led by Fairfax and the charming and intelligent Lady Durston, who pushes Fairfax past where he would otherwise have gone. The understated prose is the perfect companion for the tale, both its blisteringly clear large-world ideas and the nuts-and-bolts mystery. The Second Sleep is a smart and engaging novel.