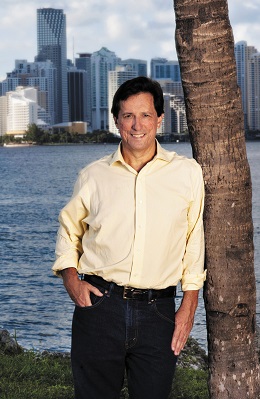 But the award-winning Florida author is about to see the world premiere of his first playscript, Watson, at GableStage this weekend–as much a howdunit and whydunit that ask questions about technology, capitalism and responsibility–as well as the interpersonal relationships explored in mysteries these days.

Set against the corporate world of America in the 1930s and then the Holocaust in Germany, Grippando says the true-life tale may be “the first personal information disaster” in modern story–a theme that obviously resonates with the most current headlines today.

Although the story is told through the American head of IBM, Thomas J. Watson Sr., the underlying premise has several steps. In the 1930s, IBM developed a punch card non-computer tabulating technology that could catalog and track people. A subsidiary sold many of these to the German government, which then used it to conduct a detailed census. That census recorded many details, but, on point here, religion.

When Hitler came to power, the database was used to identify and round up Jews for the concentration camp. At the camps, the detailed information about skills and the like was used to determine who could be useful temporarily and who to kill immediately.

The question–raised in a 2001 lawsuit about the company’s complicity in the horror, as well as the subject of articles and a book–is how much did Watson know what it was being used for. In 1937, he became the first American to receive the German Merit Cross, one of highest honors that Hitler bestowed on a non-German. Then in 1940, before American entered World War II, stories about the roundups and concentration camps were emerging. Watson returned the medal under significant pressure from friends and Jewish leaders.

“Was it true crisis of conscience crisis or was it a good business decision for him to issue a press release saying I gave back the medal,” Grippando said, “It certainly raises questions about morality versus obligations to your shareholders.”

Watson was a classic 20th century businessman who saw himself as one of the greatest capitalist who ever lived, but was convicted in 1912 under the Sherman Anti-Trust Act when he ran NCR. Throughout the play, his decisions and life, is being judged by his son, Thomas Watson Jr., in a contentious and complex relationship. 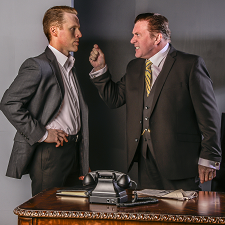 “They loved each other but they just went to war all the time, and in some ways, it's a tragedy really. Mr. Watson had an image of himself of what he wanted to be and particularly a relationship that he wanted with his son that never really materialized because of his own hubris.”

Grippando, a lawyer from Coral Springs, has always been fascinated by theater, but primarily as a patron of GableStage among other theaters and as a lawyer for Broadway producer Seth Greenleaf, who is a mutual friend with Producing Artistic Director Joseph Adler.

In fact, Grippando’s sole previous effort at writing for theater occurred a few years ago as the result of research he originally did as back story for a novel, a 1944 incident in which a 15-year-old boy was lynched in Florida. It didn’t quite work.

Grippando had heard of the 2001 lawsuit filed by Holocaust survivors against IBM, which was later dismissed because the statute of limitations had run out. But Adler had heard of it independently and asked Grippando about 18 months ago to see if there was a play in there.

Adler wrote in between rehearsals this week, “I thought it had the makings of an important play: the fact that an American corporation like IBM had cooperated with the German government by sharing important technology with them leading up to and during World War II. “

There was no immediate pressure. So Grippando spent six months on and off in research. The veteran storyteller said “It didn't strike me as a story. Joe and I bandied it back and forth for several months.

Then, he realized that Watson himself and his relationship with his son provided the necessary throughline and posed the crucial questions. 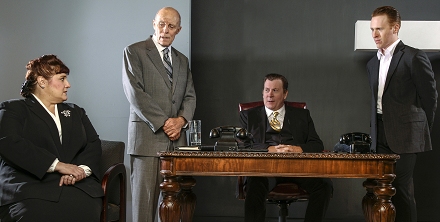 “I mean he, to the day he died, he never admitted he ever did anything wrong. So his conduct was, I would say, ambiguous. I think the audience will draw their own conclusions.”

After four very different drafts, he showed one to Adler a few months ago.

Adler recalled, “When we finally reached the point where it truly came alive, I was so excited that I made an immediate decision to put it in our very first slot. He scrapped announced plans to open his season with the political play Hillary and Clinton. “Needless to say, making a sudden change like that on such short notice presents many challenges. However, I can say with absolute certainty that the theater gods were smiling on us because it has all worked out beyond my greatest expectations.”

The two spoke on the phone and met regularly sometimes for days at a time reshaping and tweaking.

Adler said, “It has been an absolute pleasure to collaborate with James. His talent and professionalism–coupled with the fact that he works faster than anyone I have ever known–has made this everything I had hoped it would be from the moment we’ve started.”

Grippando is in no rush to tackle another play quite yet. But the experience has had some side benefits to his day job, especially when faced with some of the region’s best actors: Stephen G. Anthony as Watson Sr., Iain Batchelor as Watson Jr., plus a blue-ribbon troupe of South Florida actors playing multiple roles: Peter Galman, Diana Garle, Peter Haig, Margot Moreland and Barry Tarallo.

They provided Grippando with a humbling experience, he recalled with a laugh. “The first fatal mistake: watching an actor stumble over a piece of dialogue that you've written that you thought it was so beautifully written, that doesn't go off the tongue at all.”

Now it’s back to his prolific output as a mystery novelist, especially his series about Miami lawyer Jack Swytek, the latest of which is The Girl In the Glass Box.

“This is going to really take me up a notch just in writing great dialogue,” he added.

MysteryScene An essential voice in Appalachian and Southern noir, @DavidJoy_Author’s “When These Mountains Burn” is set in a Nor… https://t.co/XUiyDcXbCw
Sep 25 • reply • retweet • favorite