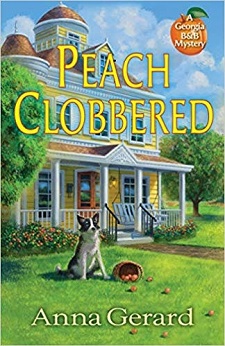 What’s in a name? For author Diane A.S. Stuckart, the next question would be, which name?

As Anna Gerard, she is launching the Georgia B&B mysteries from Crooked Lane. The first in this new series Peach Clobbered comes out July 9, 2019.

And as an animal lover, Stuckart has been able to “shoehorn” many of her pets into her books.

Her Italian greyhound Ranger was the inspiration for "Pio the Hound" in the second Leonardo da Vinci mystery, Portrait of a Lady. He was even on the cover! He also appeared in the third Leonardo book.

In one of the Black Cat Bookshop mysteries, her female Italian greyhound, Rylee, appeared as Hamlet the Cat's nemesis, Roma the Iggy (she's actually on the Japanese cover of the book). Hamlet the cat was named for her former editor's late kitty and was inspired by several other cats the author has known.

Her real life Brandon Bobtail and Ophelia were the models for black cats Brandon and Ophelia in Fool's Moon, the first Tarot Cats mystery.

Mattie the Australian shepherd in the upcoming Georgia B&B mystery, Peach Clobbered, is based on her own late Aussie, Mattie. The dog character also has a bit of her late male Aussie, Oliver, and her current mini Aussie, Winston.

Oddly enough, Stuckart said “the cover artist apparently never saw an Aussie before as the dog looks nothing like she's described” in her novel.