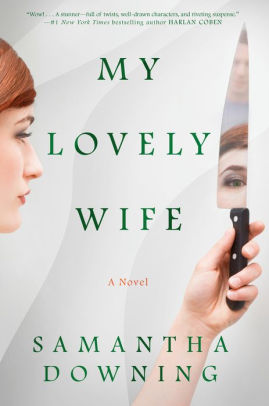 At the start of Samantha Downing’s disquieting debut, teenagers partying in an abandoned Florida motel find a female corpse wrapped in plastic. Her fingerprints are filed off, but dental records identify her as a missing young woman named Lindsay. Police reveal that she’s only been dead a few weeks—a disclosure that surprises the story’s unnamed narrator, given that he and his wife, Millicent, kidnapped her a year ago to inject some excitement into their relationship.

When he asks Millicent why she failed to kill Lindsay in a timely fashion and then dump her in a swamp as agreed, Millicent explains that she was trying to mimic the MO of Owen Oliver Riley, who strangled nine women 18 years ago this month. Riley was arrested, but then disappeared after being released on a technicality, making him the perfect scapegoat—not just for this murder, but for as many as they please. At first, the narrator is delighted by Millicent’s ingenuity and begins hunting for their next victim; as it happens, though, he finds her plan more fun in theory than execution.

My Lovely Wife is a bleak and twisted take on the modern marital thriller. Downing traps readers in her protagonist’s head for all that transpires, lending the tale a queasy, claustrophobic air. Flashbacks detail the couple’s history and the origins of their psychopathic pastime, while current events unfold courtesy of a smarmy first-person, present-tense narrative.

By placing Millicent—a 39-year-old mother of two—in the driver’s seat with regard to the couple’s criminal endeavors, Downing subverts stereotype, conferring unpredictability and compounding depravity. Deliberate pacing heightens tension and unease, and a macabre, bombshell-laden plot keeps readers riveted until the deeply disturbing conclusion. This is a book that will linger like a nightmare long after the final page is turned.