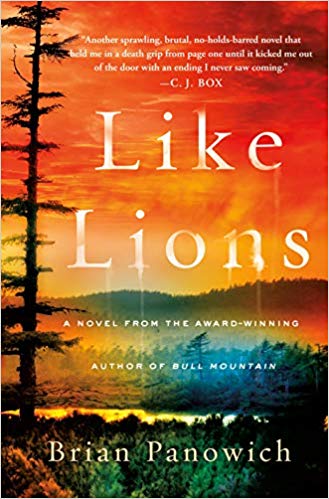 Following up on his debut novel, Bull Mountain (2015), author Brian Panowich takes readers back to the North Georgia enclave where small-town sheriff Clayton Burroughs finds himself beset on all sides. He’s still not fully recovered from the injuries he received from events in the first book, events that led to him killing his own brother. He’s drinking too much, his marriage is falling apart, and he’s neglecting his duties as sheriff. If that isn’t enough, now that his brother is gone, he’s also, by default, inherited his family’s criminal empire.

When Clayton finds himself face-to-face with an unrepentant criminal, brought to him by two members of the Burroughs crime family, he puts a beating on the man for threatening his wife and child and leaves the meeting. Told to return the man to his family, the two lieutenants discover that Clayton has accidentally killed him and decide to not tell him. This sets off a series of vengeful reprisals as the crook, stupid as he was, is the son of Coot Viner, the meth head leader of a rival criminal clan now hellbent on taking over the Burroughs’ territory. Soon bodies are dropping all over the place in a game of redneck revenge.

Clayton, who seems to truly want to let his family’s criminal past die out, tries to stay out of the situation, but when his wife Kate and infant son are attacked by Viner and his family, all bets are off. The sheriff marshals not only his law enforcement officers, but also his less-respectable resources, as all sides head toward a climactic finish.

It might strike readers aa a bit unseemly for Clayton Burroughs to be a sheriff and, however unwillingly, the head of a crime family, but you can’t help but like the guy. Panowich keeps the pace of the story lively but still does a great job fleshing out each character. His female characters are no shrinking violets, either, with Clayton’s wife Kate being a particular kind of badass throughout the story. Not being one to settle for a reset of the status quo, the author also drops a couple of bombshells in the narrative that will have far-reaching consequences down the line.

Like Lions, sharply written and charged with an adrenaline fueled plot, will leave readers with their jaws dropped and minds blown as we wait to see what comes next for the Burroughs family.