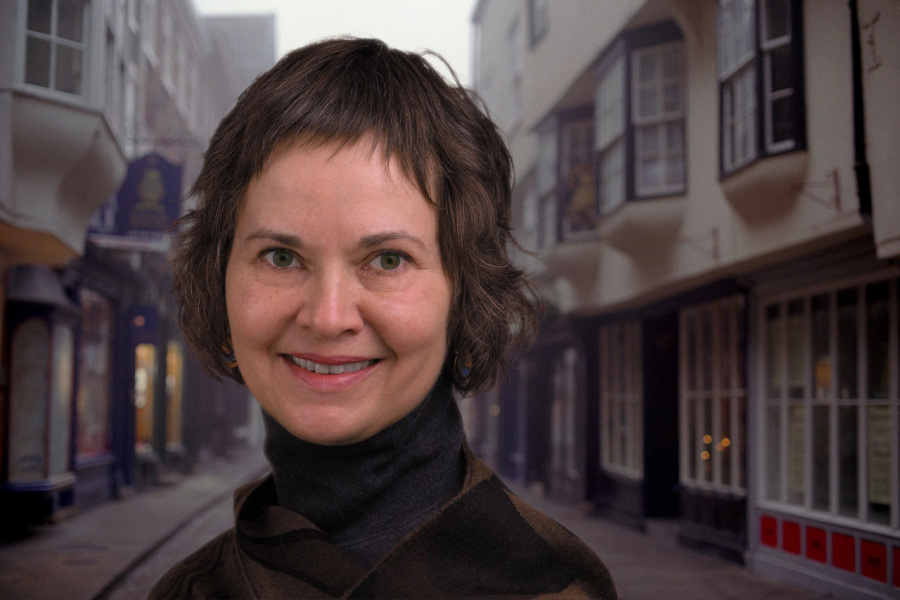 I met Candace Robb when she was touring with her first book, The Apothecary Rose, in 1993. She has since written 10 Owen Archer books, three Margaret Kerr books, and is now writing the Kate Clifford books set in 15th-century York. With each one she approaches history via a unique character, in Kate’s case, she is a widow with adopted children who is working to pay off her dead husband’s debts and stay afloat amongst the political intrigue that was a huge part of her time. And watch out—she has a throwing axe in her skirt!

How did you come up with Kate Clifford? She's one of those characters that fully springs to life from page one—and she has such an interesting backstory as well.

Kate Clifford arrived in my life in a daydream, striding down Stonegate flanked by a pair of Irish wolfhounds, the tops of their heads level with her shoulders. I sensed the axe hidden in her skirts, saw wild dark hair escaping from her crispinette. She turned left onto High Petergate and stopped at a well-appointed house where an elderly woman greeted her as her mistress. How could I resist this vivid glimpse that left me asking, Who is she? I wrote The Service of the Dead to learn her story, then A Twisted Vengeance to tease out her mother’s tragedy.

And how about her cook, Berend? I know he's a favorite with readers (and with me). I liked that this new book fleshed him out more but I sense there's even more to know about him.

Berend’s arrival was more typical for me—he simply appeared in a scene, battle-scarred, muscular, kneading bread. I laughed and thought, He’s perfect for Kate’s household, and kept on typing. But by the end of the second book, I realized his depths, and could not resist testing them in A Murdered Peace, which feels very much to me like Berend’s book. The more I wrote, the more intrigued I became, and I cannot predict how the rest of his story might play out. He broke my heart as he broke Kate’s. Not that she can’t find joy, but he was far more important to her as a comrade than as a potential lover.

Are you a dog person? I love Lille and Ghent, who are incredibly well trained. I know you are nothing if not an ace researcher, so how did you research the dogs and their training?

I’m an animal lover, and engage dog walkers in conversations about their wonderful companions, but my partner is strictly a cat person. Fortunately, one of my good friends is a canine expert, currently training law enforcement departments in her state about dealing with canines on both sides of the law: how to read them, how to calm them, etc. She spent hours on the phone with me explaining the differences in training and behavior between scent dogs—like many hounds, and coursing dogs—such as Lille and Ghent, who are Irish wolfhounds. We discussed what the dogs were likely to do in a variety of situations, and she often sent me links to videos backing up her explanations. I also had hands-on experience with Irish wolfhounds early on, when my cat’s veterinarian connected me with a couple in my neighborhood who live with a pair of Irish wolfhounds. They were wonderful about inviting me to visit. Sadly they’ve moved out into the country—but it’s a great move for the dogs.

The history of this book was new to me! I didn't know King Henry took over and imprisoned King Richard. Can you set up the historical background a little bit for readers?

The very short version: King Richard II banishes his cousin, Henry Bolingbroke, from the realm, but assures Henry that when his father, John of Gaunt, Duke of Lancaster dies, he will inherit the Lancastrian title. Upon Gaunt’s death, Richard breaks that promise, parceling out Henry’s inheritance to his supporters (he has become an unpopular king, especially among the powerful barons who expect him to cheat them as they have his cousin.) Henry takes advantage of Richard’s Irish campaign, when the king and the bulk of his army are in Ireland. He returns to England to claim his inheritance, landing in Yorkshire. The nobles not involved in the Irish campaign rise in support of Henry. As he crosses the country to confront Richard he collects a great army, which is perhaps what convinces Henry to reach further than the dukedom and take the crown from his cousin. He captures Richard, spins a tale of Richard willingly abdicating, and imprisons his cousin in Pontefract Castle. When some of Richard’s loyal followers try to rescue him, Henry realizes his throne will never be secure while his cousin lives. The timing of Richard’s death is still debated, but his corpse showed no signs of physical trauma. Henry claimed his cousin starved himself to death.

When you sit down to write a book, what's foremost in your mind? Do the characters and situations spring from your research? Do you come up with a story first?

Yes to all, at various times. The book I’m currently writing was inspired by a particular character, but as it’s the 12th in a series I immediately considered how it would fit in, what year it was in the series, and what was going on in history at that time that provided a background and perhaps even a motivation. And as I collected all this, the story began to grow and branch out in my mind. The 11th Owen Archer (A Conspiracy of Wolves), out next year, carried the burden of reviving a series, but the backstory of the book has been in my head for several years. As I mentioned above, The Service of the Dead began with Kate striding into my daydream.

I was interested in the last book by the Beguines, who are also in this book to a lesser extent. Can you talk about them a bit? So much of the history you share with readers is not as well known as some bits of well-covered history, a real strength of your novels.

Thank you! That’s one of the things I love about writing a historical crime series—rather than needing to provide a broad historical backdrop I can focus on more specific incidents or trends. The Beguines were part of a wider movement of lay devotion in the Low Countries. What was unique about the Beguines is that the communities were not endowed convents for cloistered women but were more in the spirit of women’s collectives who supported themselves by working outside or within their communal houses as healers, teachers, even weavers and sempsters. In many Beguine communities women could leave, perhaps marrying and having children, and then return when their families were mature. This very flexibility was controversial. The church tolerated them as long as they were “guided” by male confessors (priests, abbots, bishops). 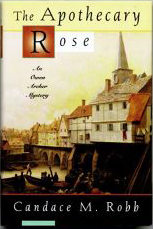 You have been in the game for a long time now with several different series and different publishers. What have you learned in your long career about writing? About the book business? How has it changed since The Apothecary Rose was published in 1993?

Lessons about writing: Writing begets writing. If I don’t want to dry up, I must keep at it. When the characters start rebelling, pay attention. Never, ever force them to adhere to a “plan.” I prefer writing historical mysteries to writing historical novels that are, essentially, fictional biographies, because I like to play God with my main characters. I found it too frustrating to have no control over the fates of Alice Perrers (The King’s Mistress) or Joan of Kent (A Triple Knot).

The book business has changed so much I wouldn’t know where to begin. Once upon a time publishers sent authors on book tours, planned and financed by them, even if they weren’t celebrities or already mega-sellers. A new writer could quit her day job and focus on writing. Now, even when published by one of the Big Five [Hachette, HarperCollins, Macmillan, Penguin Random House, and Simon & Schuster], much of the marketing burden is on the writer. And we’re expected to engage with our readers in between books with social media. Fortunately I enjoy having more engagement throughout the year with my readers. It’s fun to share “medieval news” with them on Facebook, and Twitter helps me keep up with historians around the world, as well as fellow authors and readers.

I know Owen Archer is returning—yay! Can you fill readers in on Owen and his return?

I am delighted to be working with Severn House for the new Owen Archer mysteries—the first (11th in the series), A Conspiracy of Wolves, will be published in the UK in hardcover in April 2019, then in the US in August 2019. I’m working on the next.

And finally, can you name a book that was transformational for you? One that set you on your reading and/or writing path?

One? Too difficult! But I can name a cluster. Katherine, by Anya Seton, and Cecelia Holland’s The Firedrake, The Kings in Winter, Antichrist, and The Earl were revelations for me. They proved it was possible to write and successfully publish historical novels that focused on the history and culture rather than on whether or not the hero and heroine would have sex and live happily ever after. Although Katherine is a famous love story, it does not end happily, and there is much suffering and unpleasant but fascinating detail throughout.

The author who most inspired me to write was Ursula K. LeGuin. Her fiction was—is!—heartfelt and yet deeply anthropological, a wondrous combination. And it was during a workshop with Ursula that she suggested I shift from fantasy to historical fiction, that therein lay my unique talent. The rest is history! (Sorry, old joke.)

Candace Robb is a historian with a focus on 14th century Britain and historical crime fiction. She is the author behind the Owen Archer mysteries, the Margaret Kerr trilogy, and the Kate Clifford mysteries set in 15th century York. Under the pen name Emma Campion, she also authors historical novels about intriguing women from King Edward III's court.