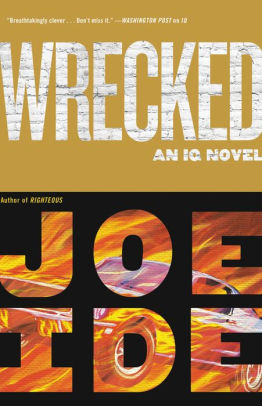 Wrecked is Joe Ide’s third Isaiah Quintabe thriller. Isaiah, known as IQ, is an East Long Beach, California, private eye with a penchant for helping people without many resources. He is happy to trade an IOU (without ever collecting on it), a handmade reindeer Christmas sweater, carpet cleaning, and nearly anything else for his services. This business plan is satisfying for his clients—especially since IQ is very good at what he does—but unrewarding for his bank account. To help collect his debts and attract larger clients, IQ warily partners with an old friend, Dodson.

When a young artist named Grace approaches IQ for help finding her mother, who ran away from a murder rap when Grace was a teenager, in exchange for a painting, it strains the young partnership to the breaking point. Dodson thinks IQ is taking the case without pay because he likes the young woman, which is mostly true, but IQ’s inability to say no to anyone in need is the true culprit. And his option to drop the case evaporates when he uncovers a conspiracy that goes back 15 years to Abu Ghraib, the Iraqi prison where American service members tortured suspected Al-Qaeda members during the Iraq War, and it becomes obvious Grace’s life is in danger.

Wrecked is a beautifully written, character-rich, and deftly plotted detective thriller. Its working-class California setting is vibrant, as both a geographical place and a mixing pot for the lively, at times oddball, and always entertaining characters.

IQ is a hero worth reading about and rooting for. He is two parts Sherlock Holmes—his cases are solved with a high quotient of brain power—and one part hardboiled private eye. The novel’s melancholy mood is lightened with humor and IQ’s thoughtful goodness. The story is surprising and original with enough twists to satisfy any reader. Wrecked is that rare treat that works as a thriller, as a detective story, and most importantly, as a clear-eyed observation of the modern world.