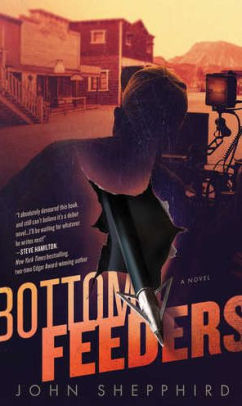 Satirical in nature, Bottom Feeders is a fast-paced, fun read that explores a part of the movie business that often gets overlooked. In John Shepphird’s debut novel, the reader follows the cast and crew of a low-budget, made-for-television movie, who find themselves (literally) in the crosshairs of a deadly killer.

The whodunit nature of the book feels a bit beside the point in this dark comedy. Shoehorned into the story is a murderer who shoots deadly arrows at the cast and crew. It is a perfectly serviceable plot point, however, the true joy of Bottom Feeders is everything that surrounds the underlying mystery: Sheppird’s light touches and the super-specific send-up of the people who make movies that don’t ever end up in theaters.

Happy to make fun of aging actors who demand hats to cover their receding hairlines and directors who are more interested in hard liquor than the actual movie they’re working on, Shepphird never loses his playfulness as he delves into the intricacies of the business. But for all his lampoons, the author’s affection for these so-called bottom feeders is generously apparent.

The pages move quickly, the story adheres to a classic whodunit formula, and from “Action!” to “Cut!” it’s a pleasure to read.