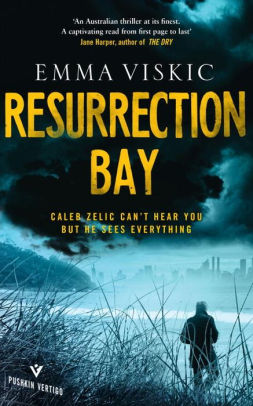 This highly original crime debut scooped up five different book awards in Australia in 2016, and now US readers have a chance to judge it for themselves. What they’ll find is further evidence of the treasure trove of crime writing talent Down Under, just waiting to be discovered by the wider world.

“Deaf man investigates  friend’s murder” would be the  Hollywood tagline, but this tale  is about much more than its  main character Caleb Zelic’s  deafness. It never feels like  Emma Viskic uses Caleb’s condition as a mere quirk to make  him stand out in a crowded  crime field. His deafness infuses  his personality and story, affects  how he sees the world and how  people react to him, and feels  an organic part of a greater whole, rather than something done to be original. There’s a real authenticity, not tokenism.

Caleb is stubborn, but an intelligent observer, who reads other people’s body language and perceives nuances others miss. But he also misses things himself. He teams up with Frankie, a tough female ex-cop, to hunt for the mysterious “Scott,” the last word ever sent by his dead friend.

Viskic does a great job bringing her entire cast to vivid and authentic life, along with the Melbourne setting—both the city and the rural and small-town areas surrounding. She captures the contemporary melting pot of Australian life. Powered by lean prose, this is an interesting, assured, and excellent debut.