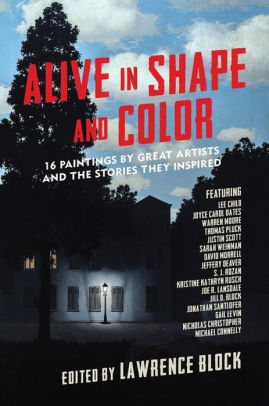 Alive in Shape and Color, edited by Lawrence Block, is the follow-up to Block’s impressive 2016 anthology, In Sunlight or in Shadow. While its predecessor used paintings by Edward Hopper as inspiration, the stories in this anthology are inspired by paintings from a variety of artists. The 16 tales, on average, are a step below those featured in In Sunlight or in Shadow, but several capture every hue, tint, and tone of what makes a story captivating.

Over the past few years, Lee Child’s short fiction has become my favorite of his work, and “Pierre, Lucien, and Me” is an example of why. A historical caper set in the late-1920s and inspired by Auguste Renoir’s Bouquet of Chrysanthemums, it’s devious, humorous, and smart. “Charlie the Barber” by Joe R. Lansdale, inspired by Norman Rockwell’s First Trip to the Beauty Shop, is a hardboiled, richly detailed and violent story about a World War II veteran with a dark secret and an unusual route to redemption. The anthology’s only reprint, David Morrell’s “Orange Is for Anguish, Blue for Insanity,” is also my favorite. Inspired by Vincent Van Gogh’s Cypresses, it is a dark tale about art, obsession, and insanity.

Alive in Shape and Color has a somber note, not because of the stories included in its pages, but rather what is missing—a story by its editor, Lawrence Block. His explanation for this appears to announce his retirement as a fiction writer. In his introduction, Mr. Block writes, “I’ve been [writing fiction] for 60 years. And I’ve been getting the message lately that it may be something I can’t do anymore.” He has accomplished more in those 60 years than anyone could possibly expect, but, while I’m not asking for more, I am hoping for more.