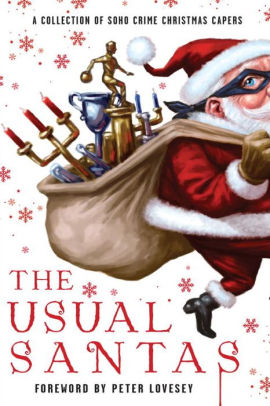 The Usual Santas is something of a primer for Soho’s impressive lineup of international crime writers, and each story has a holiday-season twist. There are 18 tales by accomplished, and lauded scribes including Helene Tursten, Mick Herron, James R. Benn, Cara Black, Peter Lovesey, and (if you are counting) 13 more. Tod Goldberg’s fine “Blue Memories Start Calling” is a melancholy small-town murder tale with a crisis of conscience at its center. A sheriff who has mindfully followed the law his entire career is faced with a new dilemma: doing the wrong thing for the right reason.

“PX Christmas” by Martin Limon is a nicely complex procedural set on the US Army base in Seoul, South Korea, during the 1970s. A hard-line Christmas-time suicide prevention policy intermingles with a black market ring, which leads CID investigators George Sueno and Ernie Bascom to become the vehicle for another’s redemption. Stuart Neville’s macabre crime story “Queen of the Hill” is both bleak and brilliant. A Belfast tale without hope or joy is a genuine Christmas treat.