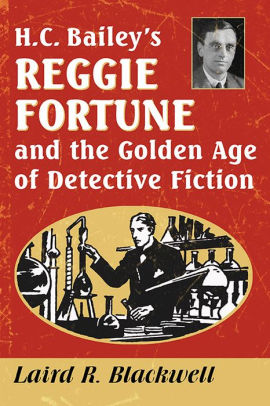 Bailey and Fortune, in their time (1920s through 1940s), were among the most popular and critically admired author-detective teams in fiction. According to Blackwell, Bailey was one of the Big Five of British Golden Age writers, along with Agatha Christie, Dorothy L. Sayers, Freeman Wills Crofts, and R. Austin Freeman. In the years since, the reputations of the two women have survived but the three men have slipped somewhat, none so much as Bailey, whose relative obscurity Blackwell finds unjust. To prove his point, he analyzes at length not only the Fortune stories but those about his predecessors and contemporaries, from Dupin through Queen and Poirot. Identifying ten types of detective characters, Blackwell believes he can squeeze Fortune into eight of them (Eccentric Thinking Machine, Scientist, Psychologist and the Intuitive, Defender of Justice, Philosopher, Erudite Scholar, Aristocrat, and, most surprisingly, Hard-Boiled), leaving only Ordinary and Mystical/Psychic. In the course of urging the reader to explore Fortune, Blackwell makes a tantalizing case for such characters as T.S. Stribling’s Henry Poggioli, Melville Davisson Post’s Uncle Abner, William Faulkner’s Gavin Stevens, M.P. Shiel’s Prince Zaleski, Nicholas Blake’s Nigel Strangeways, and Clyde B. Clason’s Theocritus Westborough. A chapter comparing Fortune to other popular detectives concludes with a terrific selling job on Blackwell’s choice of ten best Fortune stories. A chapter on the reasons usually given for the popular decline of Bailey and his character effectively debunks most of them. Appendices list “The Most Memorable Golden Age Detective Stories” (only Doyle and Chesterton have more titles chosen than Bailey) and contents of the Fortune short-story collections and novels.

Rare errors: there were 56 Sherlock Holmes short stories, not 55; Stuart Palmer’s Hildegarde Withers never appeared in silent films, having made her print debut in the sound era; and it’s not true that Philip Marlowe appeared only in novels.