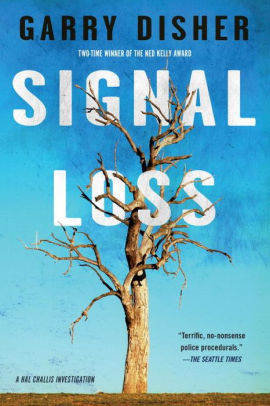 Signal Loss is Garry Disher’s seventh Inspector Hal Challis and Sergeant Ellen Destry police procedural. The Mornington Peninsula, a rural suburb of Melbourne, Australia, is a booming destination for tourists and wealthy weekenders seeking quiet. Its old farms are struggling to survive and the inexpensive housing, as compared to Melbourne, has attracted new developments for both the middle-class and the working poor.

A wildfire sweeps across the lower Peninsula, killing two men in an out-of-town Mercedes transporting illegal firearms, and revealing a meth lab in an abandoned house. Inspector Challis, in his role as head of Peninsula East’s Crime Investigation Unit, catches the case of identifying the two men burned to death, while Senior Sergeant Coolidge, a hotshot from Melbourne’s Drug Squad in town as part of a task force studying the meth trade on the Peninsula, takes the lead on the meth house investigation. The two cases seem connected and Challis has to chase the game since Coolidge’s career aspirations have little to do with cooperation. Add to this, what Ellen Destry believes is a serial rapist working the area, a series of farm equipment thefts, a missing girl, and a police station mole, and there are enough balls in the air to keep the most jaded reader interested.

Signal Loss is a nicely rendered procedural with complex plotting, a high level of character development, and a vibrant setting. The Peninsula is vividly drawn, from its agricultural lands to its beaches, to its cities, and to the working-class housing estates blossoming across its landscape. It’s a beautiful place, playing host to a population with all its modern ills: drugs, greed, murder, envy. Most readers will want to visit more than once.