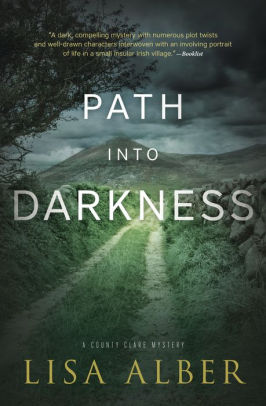 Path Into Darkness is Lisa Alber’s third County Clare mystery set in Ireland and featuring Detective Sergeant Danny Ahern and “Californian-in-residence” Merrit Chase. Merrit discovers the eccentric Joseph Macy, known around the Irish village of Lisfenora as Elder Joe, stabbed to death in his home. Both protagonists on the case find themselves preoccupied with personal issues. DS Ahern, the lead investigator for Joe’s murder, is distracted by his wife, Ellen, who lies comatose in a hospital bed, and Merrit, an accomplished amateur sleuth and meddler, is dealing with her father’s lung cancer.

When another murder victim, Annie Belden, is found with a bouquet of dead flowers, the investigation turns to Nathan Tate, a potter with romantic inclinations toward Ms. Belden. Nathan, who is haunted by terrible dreams, begins to slowly unravel under the pressure of his nightmares and the investigation. His adult daughter, the beautiful Zoe, is home to help her father with his troubles, but as Ahern continues to dig, it becomes apparent that both Nathan and Zoe have secrets worth hiding.

Path Into Darkness is a complex and darkly atmospheric novel. Its rural Irish setting is nicely rendered and the dialogue has the ring of authenticity (though the author tends to over explain the Irish idiom, which dampens its effectiveness). The story develops at a crawl in the opening chapters as characters, and their personal demons, are introduced, but as the mystery deepens and the Tate family’s secrets unravel, so does the tension and pace. It should appeal to readers with an appreciation of well-developed characters, and a desire to read and experience a foreign place.