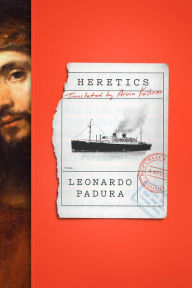 Heretics, by Cuban novelist Leonardo Padura, featuring former Havana police officer Mario Conde, is an intelligent and largely successful balancing act of historical epic—the relationship of a Rembrandt sketch and its European Jewish family owners the Kaminskys from 1648 to its disappearance in 1939 after the family’s failed attempt to enter Cuba and escape Nazi Germany—and a gritty, almost hardboiled mystery.

Conde, charming and impoverished, earns a meager living as a finder of rare books for an entrepreneurial book dealer who, knowing Conde’s past life, sends wealthy American artist Elias Kaminsky to his door to hire Conde as a private detective with the promise of a strange tale and fat fees. The missing Rembrandt has reappeared at a prestigious London auction house where it is expected to fetch $2 million, and Elias, the grandson of its last known legal owner, wants to know where the painting has been and if it had anything to do with his father’s exodus to America in 1958.

The painting’s story, which is really that of the Kaminsky family, moves back and forth in time, from place to place—Havana, Krakow, Miami—sketching a fascinating tale as broad as the human experience with enough meaning and detail to keep academics busy for years. An alluring mystery, a well-described Havana, and the likable Mario Conde are Heretics’ major strengths as a crime novel. Its only flaw is its robust length, which acts to rob the narrative’s immediacy, and, in so doing, flattens its hardboiled appeal.