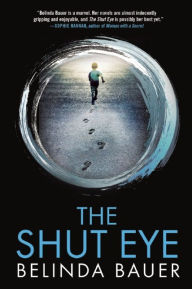 Belinda Bauer’s career in the United Kingdom has apparently been much celebrated, but she’s not as well known in the United States, and that’s a real shame. This thriller is everything a good thriller should be, and more. Bauer immediately gets the reader emotionally invested in her characters by taking the reader inside the heads of two bereaved parents, and she then proceeds with her no-holds-barred story, which often, to my delight, went to places I did not expect.

The story concerns the little family of James and Anna Buck, whose small son, Daniel, has disappeared. Threaded through their story is the path of Inspector John Marvel, who has an obsessive need to solve the case of a missing young girl, Edie, but who is instead assigned the task of finding the missing poodle of his boss’ wife.

Anna Buck has become nonfunctional. She takes out her grief in the form of cleaning their tiny apartment, where she can sense germs festering; she even makes James take off his shoes and work overalls (he works at a garage) before he comes into the house. The only time she leaves the apartment is to obsessively polish the tiny footprints Daniel left in the wet cement in front of James’ garage. And it’s James she blames for Daniel’s disappearance—on the day he vanished, James had left the apartment door open. This does not make for a happy marriage.

Marvel is also deeply unhappy about having to look for a lost dog, a search he takes as seriously as possible to his own disgust. But he’s still thinking about, and looking, for Edie. Also woven in to the narrative is the point of view of Edie, who is a captive somewhere, surviving by pretending to be her favorite thing, an astronaut lost in deep, dark space.

As the three story threads converge, Bauer takes an unexpected turn when Anna decides to try a psychic to see if he can help her find Daniel, who she is sure is not dead. The Shut Eye is a term referring to a true psychic, one who can “see” the truth. It’s unclear if the psychic Anna finds is authentic or not, but the twist seems to be that Anna herself has some psychic sensitivity of her own.

I have always been a sucker for psychics in mysteries—Martha Lawrence’s short-lived Elizabeth Chase series from the ’90s is one of my favorites—and this novel was just as pleasing to me. Anna is both bewildered by, and uncomfortable with, the things she is “seeing” and it makes her act in all kinds of off-putting and bizarre ways.

I was surprised by the way Bauer wrapped up the story, which was unexpectedly not as dark as I supposed, and I loved the way she drew her plot lines for Anna, Marvel, and Edie together. She is a real narrative master, but she also has a great hand with character. These people and this story did not leave my head quickly; I thought about both after I closed this book for the last time. This is an exceptional thriller.