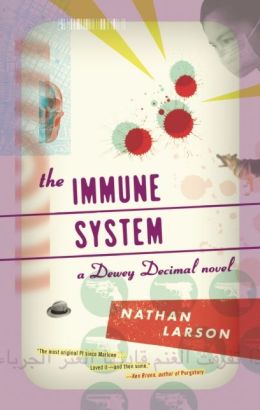 We know that all good things must come to an end, and Nathan Larson’s The Immune System: A Dewey Decimal Novel gives us the final installment of one of the finest (and weirdest) thriller trilogies ever. After the apocalyptic adventures of Larson’s incorrigible protagonist in The Dewey Decimal System and The Nervous System, the author delivers a grand finale worthy of his grand—if brain-addled—hero. In the near-future, the few who survived the world-changing “Valentine’s Occurrence” are living in the rubble that was once Manhattan. This wasteland has been divided up between warring factions: the Coalition, the Chinese, the Russians, and a mysterious company called Cyna-corp. “Decimal,” as he is called since he can’t remember his own name, works as a freelance troubleshooter. In this, his last detail, he is asked to provide protection for two young Saudi royals. The job turns out to be rougher than previous assignments, because everyone in what’s left of Manhattan—and possibly the world—wants to kill them. Decimal is no fool. He realizes that given his many addictions (drugs, hand sanitizer, etc.), he should be the last person called on to protect anyone, let alone the last two surviving members of the House of Saud. Something is fishy somewhere. However, he’s also addicted to excitement, and can’t pass up the challenge. Therein begins a thrill ride of major proportions. Told in Decimal’s own brutal voice, a free-form, expletive-rife poetry rap perfectly suited to the chaos surrounding him, the plot rockets from rat-ridden basements to posh executive suites. Through it all, Decimal fights off not only outside adversaries, but also his own crazy urges. Due to an electronic implant in his neck, much of his memory has been erased and false memories implanted, so he no longer knows for certain which side he is on. This uncertainty lends piquancy to his every waking moment, because when he at long last falls in love, he can’t be sure if the emotion is real or programmed. There is physical action aplenty in this breathtaking novel—fistfights, shoot-outs, bombs, etc.— but during the finale of Larson’s glorious trilogy, we learn that in the end, the only struggle that ever mattered was Decimal’s struggle with himself.

Nathan Larson gives readers the final installment of one of the finest (and weirdest) thriller trilogies ever.