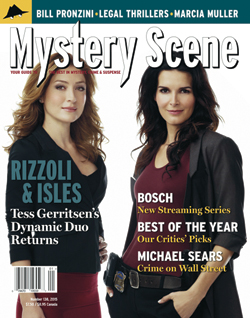 The author of the Rizzoli and Isles thrillers talks about women in the workplace, the power of female friendship, and the benefits of an outsider’s viewpoint.
by Oline Cogdill

Wildly successful in their day, The Moonstone and The Woman in White remain surprisingly modern in tone and outlook.
by Michael Mallory

Recent legal thrillers sure to get your pulse pounding.
by Jon L. Breen

Decades on Wall Street have given this author plenty of material to fuel his fast-paced, colorful financial thrillers.
by Oline H. Cogdill

Our critics’ choose their favorite criminous entertainments of 2014.

Bill Pronzini and Marcia Muller have teamed up for a rip-roaring historical mystery series set in San Francisco of the 1890s.
by Ed Gorman

The Harry We’ve Been Waiting For

“The Belle of Bulletmore’ Crossword