Books
Riders on the Storm 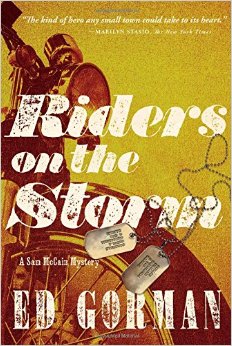 In the earliest books, set in the late ’50s and early ’60s, Vietnam was simply a fly somewhere out there in the dark, buzzing insistently but never quite landing. But as time marches on, the war (and the debate about it) has become harder to ignore, finally coming home to roost at the end of Bad Moon Rising (2012), when National Guardsman Sam is called up.

Riders on the Storm, then, presents the aftermath, and it’s at least as dark and unsettling as the Doors song that inspired its title. The veneer of innocence this series has always hinted at is chopped and broken. Sam is back home after months in a military hospital, his brains scrambled to the point where he didn’t know who he was for several weeks. But the cruelest irony of all may be that his injuries weren’t even received “over there”—the accident occurred stateside, while he was still in boot camp. But there’s more cruelty in store—while he was out of commission, his mother suffered a stroke and is now living in Chicago with his sister, and his fiancée sent him a Dear John letter.

It’s 1971, and there’s a lot of hatred and spit in the air, directed at both anti-war protestors and returning vets, and Sam, still shaky, is caught up in the middle. But “that piece of shit war” isn’t over yet, not for Sam, or for anyone else. Soon enough he finds himself defending Will Cullen, an old friend he’s known since First Communion, a quiet-spoken, recently returned veteran who’s been charged with the brutal murder of another returning vet. Steve Donovan, a rising young pro-war politician, was found beaten to death in a parking lot with a tire iron, just hours after he had savagely pummeled Will in a very public dispute.

Nothing, of course, is quite as simple or straightforward as it seems. Not Will’s guilt or innocence, not the war, not Sam’s tentative steps back into civilian life.

In a world of black-and-white political rhetoric and dumbed-down history, the always effective Ed Gorman brings a full box of Crayolas to the party. These are not stick figures mouthing empty talking points— these are real people with real hopes and real dreams, feeling real pain.