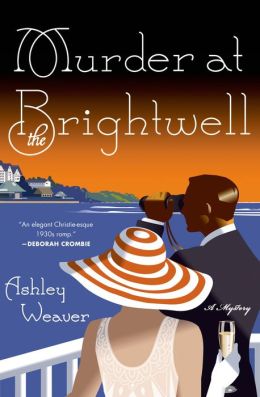 Set in 1932, this frothy historical tale succeeds more completely as a relationship fable than as a mystery. The opening sentence “It is an impossibly great trial to be married to a man one loves and hates in equal proportions” sets the tone for the entire novel.

The setup for the story is quite traditional: lovely Amory Ames, married to the rakish Milo (referred to in the first sentence), has been pondering the wisdom of her five-year marriage when her old suitor Gil turns up, asking a favor. His sister Emmaline is on the verge of what he feels will be a disastrous marriage, and he wants Amory to accompany him to Brightwell, a seaside hotel, to try and talk her out of the match.

Amory, frustrated by her husband’s own unannounced comings and goings and his wide reputation as a ladies man, scandalously agrees to go with Gil. When they arrive at the Brightwell, there are many nudge-nudge-wink-wink responses to the unmarried travellers. Inevitably, Emmaline’s dastardly fiancé is murdered, and Gil becomes the main suspect. Gil’s devastated sister won’t leave her room and Amory feels she must do what she can to clear her old flame’s name. Complicating matters is the surprising arrival of Milo, who has suddenly become very attentive to Amory.

The Brightwell’s vacationing group presents the reader with a wide array of suspects for the crime, and the seaside hotel is a perfect, secluded location.

To me, that’s all backdrop to the really interesting dilemma that Amory finds herself in romantically: Is it the steady, virtuous (and perhaps murderous) Gil who is the right man? Or is it the gorgeous, peripatetic Milo whom Amory belongs with? She feels she can trust neither, and the author is expert in keeping you guessing.

When a second murder occurs, the plot thickens. By the time I got to the end, I was as invested in the outcome of the killer’s identity as in which man Amory would ultimately choose. This is a pleasant, light, and surprisingly thoughtful read.