Alison Gaylin and a Perfect Memory 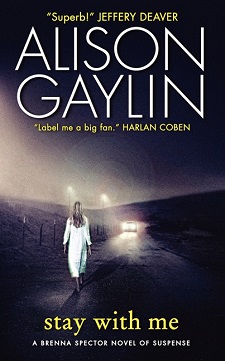 We all know that fact is stranger than fiction.

Think about 10 significant but bizarre instances that have occurred during the past 50 years. Now, if any of those instances made it into a novel, would you believe it? Thought not.

Hyperthymestic syndrome, a rare disorder that gives a person perfect autobiographical memory, has been making its way into novels, movies and television shows for the past 25 years.

But when I first heard about this syndrome, I thought that can’t be real. I can’t even remember where I left my glasses 10 minutes ago so how can someone remember every detail about their life?

And yet this syndrome is quite real.

And it makes for some interesting twists in mysteries.

Alison Gaylin has been using Hyperthymestic Syndrome in her series about private investigator Brenna Spector. Stay With Me, Gaylin’s third novel in the series, recently came out.

The ability to remember every moment of her life helps Brenna as a private investigator, but wreaks havoc on her personal life. Brenna developed the syndrome when she was around 11 years old. The syndrome was triggered by the disappearance of her sister, Clea, disappeared at age 17, more than 28 years ago. And that disappearance is the one piece of her memory that is blank, a situation that Gaylin uses well in Stay With Me.

On the CBS crime drama, Criminal Minds, the character Spencer Reid states on many occasions that he possess an eidetic memory, which is often linked to hyperthymesia.

On Unforgettable, another CBS series, Poppy Montgomery plays New York police detective Carrie Wells. She hopes that the job will allow her to try to find out the one thing she has been unable to remember, which is what happened the day her sister was murdered. At the beginning of the show she says: “I'm Carrie Wells. Only a few people in the world have the ability to remember everything. I'm one of them. Pick any day of my life, and I can tell you what I saw or heard: faces, conversations, clues (which comes in handy when you're a cop). If I miss something the first time, it's OK. I can go back and look again. My life is...unforgettable.”

And on the CBS comedy (what is it about CBS?) The Big Bang Theory, Sheldon Cooper everything from the day his mom stopped breastfeeding him. He describes that day as “a drizzly Tuesday.”

Actress Marilu Henner has hyperthymesia and can remember the specific details of her everyday life since she was a small child. Henner was one of six people featured during a segment of CBS’ 60 minutes in 2010. (Again, CBS!)

It’s not that people with this syndrome have really good memories, or a photographic memory. It goes much deeper than that.

And if you want more information, Google hyperthymestic syndrome.