Books
The Confessions of Al Capone 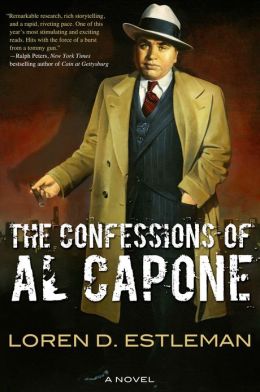 While World War II rages in Europe and the Pacific, the terror of homeland gangsters in America continues. The FBI’s godhead, J. Edgar Hoover, has ruthlessly clamped down on the mobsters’ power, but the mightiest and most notorious of all the gang leaders, Al Capone, is set to be released from Alcatraz. Hoover needs someone within his ranks to infiltrate Capone’s posse and help the FBI keep tabs on what’s going on with America’s former Public Enemy Number One, as well as capture any other bull-chested, trigger-happy thugs looking to take Capone’s place in Chicago. In comes agent Peter Vasco, whose father was once accidentally involved with Capone. Hoover picks Vasco to gather as much information as he can while going undercover as a priest. Vasco gains Capone’s confidence and the great violent unruly one’s story unfolds.

This deeply layered, ambitious novel from veteran writer Loren Estleman offers up plenty of rich historical detail and thematic complexity as it charts the bloodied career of one of America’s most infamous gangsters. Capone has been chronicled in popular culture countless times, appearing as a character in movies such as The St. Valentine’s Day Massacre (1967) and The Untouchables (1987), as well as being a major character in the recent HBO crime series Boardwalk Empire. He also inspired numerous fictional movie gangsters, ranging from Edward G. Robinson’s Little Caesar to both versions of Scarface, among others. But Loren Estleman discards the larger-than-life myth to capture the bruised humanity of this psychopathic yet all-too-human criminal.

Much of the novel is told from Capone’s viewpoint (transcribed by Vasco), and the story the gangster weaves covers his early days running liquor in New York to his days as the kingpin of Chicago with buckets of blood soaking his pudgy fists. In essence, The Confessions of Al Capone is the gangster’s biography if he’d actually written one. What’s remarkable—despite how many times you’ve read about Capone’s exploits or seen them distilled into fiction via the innumerable novels, television shows, and movies over the decades—is that Estleman makes Capone oddly identifiable because of his weaknesses, lending a real authenticity to the tale. Capone is certainly seen as a man of violence, but he is also viewed as conflicted at times. Vasco likewise makes for a fascinating character, at first determined to absolve his father’s guilt for helping Capone out, but growing increasingly more intimate and sympathetic to the man he is forced to monitor for Hoover. Vasco’s moral conflict gives the novel an emotional weight, lending an added dimension to this excellent historical crime saga.