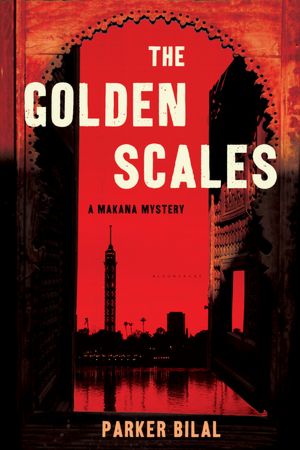 As I was reading this mystery novel, I kept thinking of The Maltese Falcon, by Dashiell Hammett...which is weird because The Golden Scales takes place in modern Cairo shortly before the Arab Spring. Upon reflection, I guess it’s because Makana, the detective in this case, is very like Bogart in a number of ways: tough, complex, more interested in doing the right thing than in money, and with a look of having seen the worst the world has to offer, yet going on.

A former police inspector in Sudan who left after the new, evil regime took over there, Makana lives in a ramshackle houseboat, his detective business in Egypt far from flourishing. One day he is approached by the minions of one of the most powerful men in the country to find his son, a celebrated soccer player who has disappeared. As he begins his investigation in the mean streets of Cairo, he realizes that there is far more at stake than simply locating a missing person.

Although the plot is labyrinthine to say the least, it moves quickly—sometimes at breakneck speed—thanks to the author’s uncluttered writing style. Along the way, we meet a variety of interesting characters, including a Sydney Greenstreet type and a Peter Lorre clone. (Coincidentally, Lorre’s character in The Maltese Falcon was named Cairo.)

This is the first of a new series by an author who was born in London and brought up in Khartoum, Sudan, and has written a number of critically acclaimed literary novels. It is being published on the anniversary of the revolution in Egypt. I strongly recommend this initial entry into Egyptian noir.