Books
Chihuahua of the Baskervilles 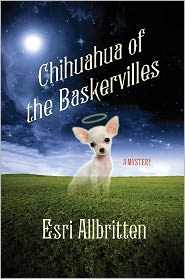 With a title like this, can a mystery be anything but hilarious? Fortunately, Chihuahua of the Baskervilles lives up to its comedic promise—and the mystery isn’t bad, either. Despite the title’s invocation of Arthur Conan Doyle, there’s nary a Holmes and/or Watson to be found here. Instead, the sleuths are a ragtag team of freelancers working for a moribund publication, Tripping Magazine. Again, flaunting expectations generated by its title, this magazine isn’t a vestige of the ’60s chemical culture. Rather, it chronicles ghostly tourist destinations and is targeted toward connoisseurs of the supernatural.

The action commences when the Boulder-based freelance team is commissioned to do a story on the appearance of a ghost—ahem—chihuahua. Ostensibly the ghost of the deceased Petey, this apparition manifests itself to the dog’s former owner, Charlotte Baskerville, who also owns a successful catalog business selling boutique clothing for dogs. Suspend your disbelief, and enjoy the play of the improbable here, as “Petey” enjoins Charlotte to divorce her husband, Thomas, and is also instrumental in causing Thomas’ death. The skeptical freelance team ultimately deflates the supernatural element of the plot, but not without offering immense entertainment value of its own, namely through the sardonic nature of its investigation. Employing deductions worthy of Holmes himself, the Tripping team reveals the truth about Petey’s ghost and about the dysfunctional dynamics of the household in which he “appears.” Frightfully funny.

Chihuahua of the Baskervilles lives up to its comedic promise—and the mystery isn’t bad, either.