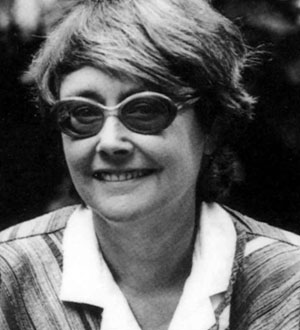 “The Chancery Bar is the ideal home for the amateur sleuth of classic detective fiction. After all, money is often the motive for murder and inheritance and complications and other financial tangles provide plenty of clues for those who specialise in that area of the law.”

So Sarah Caudwell (1939-2000) plausibly explained in a conversation 15 years ago about how she came to write mysteries with a legal background. We were from different generations, but we were both lawyers, and although my career as a novelist had yet to begin, I had been commissioned by a professional magazine to write an interview-article about her. Suffice it to say that I have never met anyone quite like Sarah: a gruffvoiced pipe smoker with a sense of humour as formidable as her intellect, fond of a drink and of good company, and, I suspect, equally capable of charm and selfindulgence. I found her fascinating and supportive and was always delighted to renew the acquaintance at crime fiction conventions. A drinks evening that she hosted at central London’s The Bung Hole (fictionalised in her novels as The Corkscrew) at the time of the 1990 Bouchercon is still vivid in my memory. News of her premature death from cancer came as a shock, the more so as she left so few books to remember her by. But what books they are: mysteries whose international success proved that skilful contemporary writers can still turn out traditional whodunits that stand comparison with the best work of “the Golden Age.”

Of the six key characters who recur in Caudwell’s novels, five are barristers practising in Lincoln’s Inn. Scatty and sexy Julia Larwood is a member of the small set of Revenue Chambers in 63 New Square; her friends Timothy Shepherd, Desmond Ragwort, Michael Cantrip, and Selena Jardine are to be found next door at Number 62. The final member of this unusual band of partners in crime is Professor Hilary Tamar, tutor in Legal History at St George’s College, Oxford, whose “interest in the principles of English law wanes with the Middle Ages.” Hilary is, in part, narrator of the stories, and the extraordinarily elaborate, mannered style with which the tales are told is an important part of their charm for many readers. One hardly expects a modern crime novel to begin: “Cost candour what it may, I will not deceive my readers.” But that is the opening sentence of The Shortest Way To Hades, and it captures accurately the Tamar voice.

“Hilary’s voice was in my head,” Sarah Caudwell told me, “before any of the plots. I knew from the outset Hilary must be an Oxford don—but of equivocal sex and even equivocal age, resembling that precise, donnish kind of individual who starts being elderly at the age of 22.” 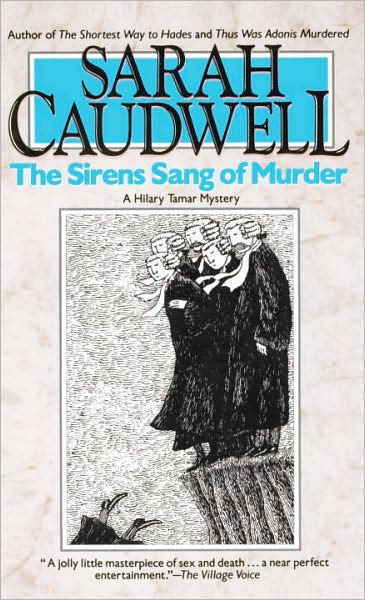 Like many crime writers in the traditional vein (Colin Dexter and Robert Barnard are examples who spring to mind) Sarah loved crossword puzzles and she often reached the finals of The Times crossword competition, in which the standards are very high. Her plotting is invariably as complicated and satisfying as the best crosswords, but there is more to her books than the puzzles. One of her strengths which has been under-valued by most critics is an effective use of settings as varied as Venice, the Ionian Sea and Sark. Meticulous in her craft (and also fond of travel) she visited the Channel Islands, Monaco and the Cayman Islands in search of a suitable locale for The Sirens Sang of Murder, which has been described as “a saga of sex, international tax planning, and witchcraft.” Another distinctive feature of the Caudwell style is her recurrent use of the epistolary form, influenced by her fondness for 18th century fiction, in which letters often played a significant part. In Thus Was Adonis Murdered, for instance, Julia’s messages from Venice not only drive the action forward but also provide clues to enable Hilary to solve a baffling case of murder. In The Shortest Way to Hades, Selena’s letters to Julia from on board ship and from Corfu perform a similar function. The same is true of Cantrip’s telexes (remember them?) from Sark in The Sirens Sang of Murder. Careful handling of this tricky device enabled Caudwell to avoid repeating herself and allowed her the flexibility of a multiple viewpoint which is much less limiting than strict adherence to first person narrative.

Sarah Caudwell’s books are admittedly an acquired taste. Subtle, complicated and witty, they appeal most to readers who hanker after the Golden Age of crime writing—Hades boasts both a family tree and a Thirties-style room plan showing the scene of the crime—and to those whose sense of humour demands something more elitist than the belly laugh. Readers who crave penetrating social comment or in-depth characterisation in their mysteries should look elsewhere. A criticism occasionally made is that she did not develop her writing much in the course of twenty years; it is, perhaps, fairer to say that the style she chose to work in carried severe restrictions which suited her, because they challenged her to spin variations on a limited range of themes.

When Adonis appeared in 1981, Caudwell was a full-time working barrister and so she chose to publish under a pseudonym. Her real name was Sarah Cockburn and she is the daughter of famous parents—the writer Claud Cockburn and the actress and journalist Jean Ross. Ross lived in Berlin in the 1930s and is widely regarded as the original of Christopher Isherwood’s character Sally Bowles (most renowned as a result of Liza Minelli’s memorable portrayal in the film version of Cabaret). Sarah graduated in Classics from Aberdeen University and then read Law at St Anne’s College, Oxford, where she became noted for her love of pipe-smoking. According to her obituary in The Times, “she also devoted her leisure to intrigues devoted to secure the admission of women to the Union, and supported her fellow students… when they dressed up as men to get into the debating chamber, from which women at that time were excluded. When the discriminatory rule was finally removed, Caudwell became one of the first women to make a speech as a member rather than as a guest.” She lectured in law for a while before being called to the Bar. After a number of years in private practice, she joined Lloyds Bank, where she specialised in international tax planning. 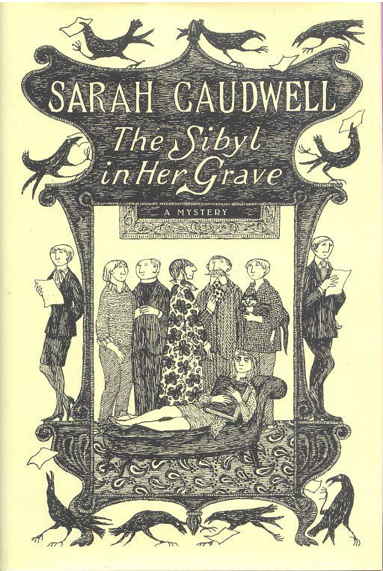 By her own admission a desperately slow writer, she eventually left Lloyd’s to concentrate on her writing whilst struggling to finish Sirens. When she and I first met, she had produced just three novels, plus an excellent tale which demonstrated a mastery of the short form, “An Acquaintance With Mr Collins.” She was at that time working on her fourth novel, but also tinkering with other projects. Perhaps the digressions gave her an excuse for not making swifter progress with the Tamar series; they included a collaboration with four other mystery writers on the theme of the perfect murder and a historical play based on the case of Daniel M’Naghten, who gave his name to the infamous M’Naghten Rules, which have long complicated murder cases where the sanity of the accused is in dispute.

Sarah assured me more than once that writing novels remained her priority, but years passed with no sign of the next Tamar novel. She had told me that it would feature the wheeler-dealers of the City of London and Hilary’s attempt to employ the methods of Scholarship to dispel Error and reveal Truth in England’s financial industry. Along with her many fans, I yearned for it to appear, but her publishers, HarperCollins, grew tired of waiting and eventually dropped her. As a result—bizarrely for a quintessentially English author whose earlier work had earned such acclaim—when The Sibyl in Her Grave finally achieved publication, it was after Sarah’s death, and in the US. A British edition did not appear until 2002 (thirteen years after its predecessor), when Robinson brought it out together with welcome reprints of the first three Tamar narratives.

The Sibyl in her Grave takes as its starting point the financial misadventures of Julia Larwood’s Aunt Regina. Full of characteristic Caudwell touches, it offers a map of Parsons Haver, the village in West Sussex where Regina lives. Once again, copious use is made of letters to move the story along. Posthumously published books tend not to excite the critics (think of the muted reaction to Agatha Christie’s Curtain, which is arguably one of her cleverest novels) and some commentators suggested that The Sibyl was but a pale shadow of its predecessors. Others took a more generous view and Amanda Cross, who could be acerbic in her views of fellow crime novelists, highlighted the novel’s considerable virtues: “wit and forbearance, intellect and passion, above all, humour and perfection of language.” There could be no better summary of the strengths of an entertaining and polished writer whose contribution to the genre, although limited, was hugely enjoyable and entirely distinctive. 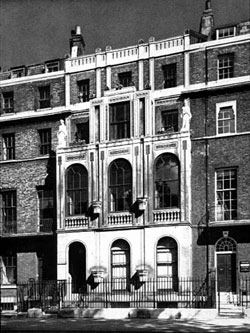 Sarah Caudwell studied law at St. Anne’s College, Oxford, was called to the Chancery Bar, and practiced as a barrister for several years in Lincoln’s Inn. The Inns of Court are ancient unincorporated bodies of lawyers which for five centuries and more have had the power to call to the Bar those of their members who have duly qualified for the rank or degree of Barrister-at-Law. With the power of call goes a power to disbar or otherwise punish for misconduct. Lincoln’s Inn is one of London’s four Inns of Court. The other three are Gray’s Inn, the Inner Temple and the Middle Temple. Lincoln’s Inn, next to one of London’s finest residential squares, is the most beautiful and least altered of the Inns. Its buildings date from the late 15th century.

Martin Edwards is an award-winning crime writer. His latest is The Hanging Wood (Poisoned Pen Press), a Lake District mystery.