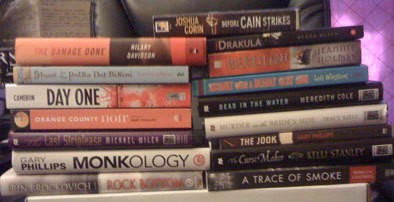 Mystery writers not only are among the nicest people around but they also are eager to help those in need.

The 14 authors who belong to the award-winning Criminal Minds blog have banded together to offer their support the Humane Society of West Alabama -- a non-profit, all-volunteer, no kill shelter in Tuscaloosa, Alabama.

Tuscaloosa was one of the cities hardest hit by the tornadoes and storms. The shelter's facilities were not badly damaged but they are in desperate need of supplies and donations. Also, the task of caring for and identifying lost and misplaced pets is overwhelming.

Each of the authors who writes the Criminal Minds blog has donated signed copies of their latest novels to be auctioned off en masse on eBay.

The winner will receive the entire collection, which includes mysteries, thrillers, and paranormal fiction. The group will donate 100% of the final bid to the shelter. The auction ends May 13.

Here's where to place a bid.

Here's what the winner will receive:

Hard Cover
Rock Bottom by Erin Brokovich with C.J. Lyons (signed by C.J. only)
The Curse-Maker by Kelli Stanley
Dead in the Water by Meredith Cole
Murder on the Bride's Side by Tracy Kiely
Monkology by Gary Phillips
The Last Striptease by Michael Wiley
The Damage Done by Hillary Davidson