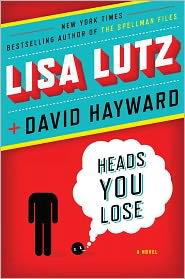 Suffering from Spellman withdrawal? Until that dysfunctional detective family resurfaces in 2012, you may find some methadone-like relief in Lisa Lutz’s latest— a comic collaboration with poet/editor/ex-boyfriend David Hayward. This just might be the emergence of a new literary genre: the therapeutic thriller—couples counseling disguised as crime fiction. Or is it vice versa?

In the email exchange that precedes the first chapter, we learn that Lutz and Hayward shared not only a long-dissolved romantic history, but also a creative partnership that ended in “epic disaster.” Yet, Lutz, “a sucker for unfinished business,” lures her ex into a new project, and Hayward is game—“hopefully not in the hunting sense,” he adds. The duo then alternate writing duties, commenting on, and footnoting, each other’s efforts along the way. As the interpersonal missives increase in sarcasm and menace, the reader soon realizes exactly why these two didn’t make it (Thanksgiving food-poisoning and near-death road trip aside)—and fear for their characters’ fates as well.

Oh, yes—about the other plot. Lutz kicks it off by introducing us to Paul and Lacey Hansen, orphaned twentysomething siblings in rural northern California who discover a headless corpse on their homestead. Since that homestead is also their marijuana farm, they think it best to remove the body to a less incriminating spot.

But then, like so much unfinished business, the corpse returns to the scene of the crime, in an even less appealing state than before. As Heads You Lose is the first of Lutz’s novels to actually have a dead body, it’s nice that it gets so much action.

By the final chapter, the once-sleepy town is littered with victims—chosen, more or less, by how annoying that character is to each co-author. When Hayward trots out (or rather, limps out) Paul’s girlfriend, Brandy Chester (a brainy stripper disabled by a pole-dancing accident), it doesn’t take a PI to deduce that she’ll soon be in Lutz’s crosshairs.

Though Lutz and Hayward’s relationship may never have true closure, Heads You Lose wraps up the wacky with a satisfying whoo-hoo! This could be the start of a beautiful fictional friendship—if the plotting pair don’t try to whack each other first.