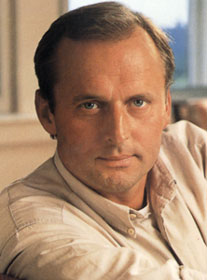 John Grisham's first novel, A Time to Kill, makes its theatrical debut on May 6 through June 19 at the renowned Arena Stage in Washington, DC. This world premier is the first time a Grisham novel has ever been turned into a play.

Arena Stage has an excellent reputation for producing interesting plays and musicals, especially new works that often make it to the Broadway stage.

If anyone can make A Time to Kill Broadway-bound, it's Rupert Holmes, who has won both the Tony and Edgar awards, among many other honors.

The prolific Holmes won an Edgar for best play twice—in 1991 for Accomplice and in 1986 for The Mystery of Edwin Drood. Holmes, who has also written mystery fiction including Swing, earned the 2007 Drama Desk Award for the book of the Broadway musical Curtains, an homage to murder mystery plots.

A Time to Kill revolves around Carl Lee Hailey who takes the law into his own hands after his daughter is brutalized. Hailey's murder trial pits his two idealistic lawyers against a strong district attorney in a racially divided town.

A Time to Kill is not only Grisham's first novel, many consider it one of his finest.

If you're a fan of mysteries on stage, then be sure to pick up a copy of the Spring Issue #119 of Mystery Scene Magazine. "Spotlight on Crime: Mysteries in the Theater" by Wm. F. Hirschman surveys the current state of theatrical crime, including chats with playwrights Michael McKeever, Joseph Goodrich, Phillip Depoy, and Rupert Holmes. We also talk with Mark Bellamy, the artistic director of Calgary's Theatre Vertigo, Broadway producer Zev Buffman, Catherine Russell, star and manager of the long-running Perfect Crime, and Ken Dingledine of Samuel French Publications.