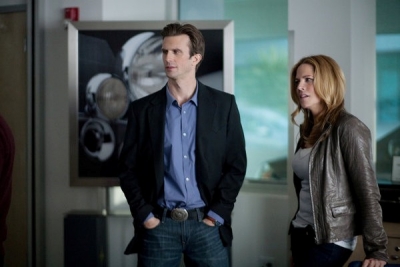 Like many of the series on the USA Network, In Plain Sight goes beyond its description.

On paper, In Plain Sight is about the U.S. Marshal’s highly secretive branch of the witness protection program (WITSEC) which relocates federal witnesses.

But the show goes much deeper as it revolves around Mary Shannon, the complicated, grumpy Marshal with a dysfunctional family, and her stoic partner, Marshall Mann. Their personal lives, especially Mary’s, are as important as the back stories of those who end up in WITSEC -- career criminals, whistle-blowers or innocents who witnessed a crime.

Humor mixed in with the drama complements In Plain Sight’s plots.

In Plain Sight begins its fourth season at 10 p.m. tonight, May 1, on the USA Network.

Recently, Mystery Scene interviewed Mary McCormack, who plays Mary Shannon, and Frederick Weller who plays Marshall Mann. Each has a long string of solid performances in TV series and the movies. McCormack and Weller also have successful stage careers. McCormack received a 2008 Tony nomination for Best Performance by a Featured Actress in a Play.for her role in Boeing-Boeing. Five of the six Broadway productions in which Weller has appeared have won or been nominated for Tony Awards, and seven of his nine Off-Broadway shows have received nominations at the Obie, Drama Desk or Lucille Lortel Awards.

During the interview, both McCormack and Weller cracked jokes and laughed, mentioned their presence on Twitter and seemed to really enjoy each other’s company.

The theme of In Plain Sight’s new season is change and the characters will undergo tremendous changes. One of the most intriguing developments – and I am not giving away any spoilers here -- will be Mary McCormack’s real-life pregnancy will mean that Mary Shannon also will be pregnant.

“Mary Shannon's not necessarily maternal so it's making for some interesting stories and character development, which I think is really fun to play,” said McCormack. “And to me, it's really interesting to see someone play pregnant who is pregnant. It's not altogether as pretty as when someone all chiseled up does it.

“As a woman, I find it refreshing to see someone who's dealing with it, someone who's passionate about their career and then having to try to come to terms with this new area in her life, which all women deal with.

“The pregnancy actually provides for really an interesting development in season four.”

And this will add another layer of change for the series.

“If the theme of the season is change, it sort of falls right into that. You know, Mary's whole life is changing. Her mom is sober, her sister's engaged and getting married and Marshall is in this relationship, which seems to be working and is sort of meaningful. And then what's she left with?

“And all of a sudden she has this enormous change in her own life too. So I think it's going to actually be really rich for stories.”

Mary Shannon, as viewers know, isn’t a fan of change.

“She hates change,” said McCormack. “And she’s sort of confused.

“She keeps expecting things to fall apart. Like in the first episode you see her expecting her sister to fall right into old patterns and it turns out she really hasn't. Her whole life has been spent taking care of other people, and now those other people randomly either get sober or learn how to take care of themselves. I think her identity's in question.

“And now on top of it she's becoming the one thing she never wanted to be, which is a mother.

“And these poor writers, I only told them I was pregnant a few episodes in, so they're scrambling. But it should be exciting.”

And how is Marshall going to deal with the pregnancy?

“I think Marshall has a pregnancy fetish, but they haven't written that in yet, that I know of,” said Weller, with a laugh.

Even if there wasn’t a pregnancy, McCormack says would continue to explore new aspects of Mary Shannon.

“I just love the character. David Maples, who created the show, just wrote a really great part. Fred's part is great too, and so is Paul Ben-Victor's. Maples really wrote some three-dimensional characters. I love them,” said McCormack.

“I love that Mary Shannon's really good at her job and not so good at her personal life. I like that she's cynical and sarcastic. It's just fun to play someone so grouchy. It's sort of refreshing. I can be a little bit grouchy myself so it's a comfortable fit.”

As Mary deals with her pregnancy, Marshall contends with a relationship with a sexy cop, which has the potential to change the dynamic between Marshall and Mary.