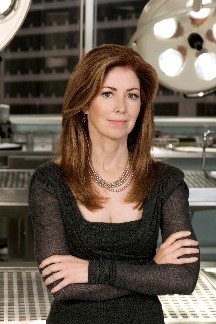 The real proof in the new medical examiner drama Body of Proof, which from a special preview looks like a run-of-the mill series, may not be in the plots, but in the appeal of Dana Delany.
Delany brings a touch of class and an emotional resolve that makes you want to root for whatever character she is playing.
Body of Proof will need every millimeter of Delany’s appeal if there is to be a future for this new ABC drama that begins at 10 p.m. EST on March 29. (Check your local listings).
Delany stars as Dr. Megan Hunt, a once-successful workaholic neurosurgeon in Philadelphia. Professionally, Hunt was brilliant, even if she often appeared cold and a bit too clinical. Then she pretty much lost everything. Following a divorce, she lost custody of her daughter and then, following a horrific car accident, lost her job.
Body of Proof picks up five years after that accident when the only job Hunt can get is as a medical examiner.
Although her confidence has been a bit shaken, Hunt is still tough as nails and sure of her skills. She also has found a new calling – speaking for the dead.
Body of Proof follows a formula set by previous cop and medical shows. Hunt will, of course, be in constant conflict with the cops with whom she works, the medical examiner’s staff and her supervisors. And she will often be right. And everyone will have a grudging respect for her.
Although Body of Proof doesn’t break any new ground, Hunt’s unresolved issues with her ex-husband and her daughter bring an undercurrent of vulnerability to the character and a hope of more complex and original storytelling to come.
Sonja Sohn (The Wire) co-stars as Det. Samantha Baker, although her role seems to be just window dressing for now.
Body of Proof replaces Detroit 1-8-7, which had an 18-episode run.
ABC’s “Body of Proof” stars Dana Delany as Dr. Megan Hunt. (Photo/ABC)
abcs-body-of-proof
1814