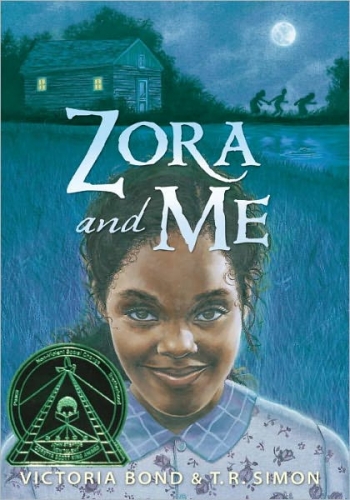 So often I am asked for suggestions on which book to read. Usually, I ask what is the person interested in, does he or she like the hard-edged stories or the softer ones, and even what the person’s occupation is. The answers factor into my recommendations.

Except when it comes to children.

Since I don’t read young adult or juvenile mysteries, I often am at a loss for recommendations. Time is the only issue on why I don’t read this category of mysteries.

But the next time I am asked, I have an answer ready: Zora and Me by Victoria Bond and T.R. Simon.

Zora and Me is inspired by the early life of African-American author Zora Neale Hurston and is set at the turn of the 20th century in a southern black community.

Zora and Me is nominated for an Edgar for Best Juvenile Mystery. (The winners will be announced April 28 in New York City.)

As Nancy Drew empowered girls of another generation, so does Zora and Me, which is all about girl power.

Zora, the “girl detective,” takes her investigating very seriously, sneaking out of the house, ease dropping and following clues. In Zora and Me, Hurston is a bright fourth grader who lives with her family in an all-black Florida town, around 1900. Zora, Carrie (the first-person narrator) and their friend Teddy investigate after a man’s headless body is discovered by the railroad tracks. Sounds like a female version of Stephen King’s “Stand by Me.”

The real Hurston often wrote about racial problems and became famous as being a part of the Harlem Renaissance writers. She wrote four novels, more than 50 published short stories, and several plays and essays. Her most famous novel was Their Eyes Were Watching God, published in 1937.

Although she died in poverty and obscurity in 1960 while living in Florida, her work continues to make an impact. About 500,000 copies of Hurston’s books are sold each year, according to the Zora Neale Hurston Trust, created in 2002.

Zora and Me is the first book not written by Hurston to be endorsed by the trust.

Now I know what to recommend the next time friends ask me what their daughters should be reading.