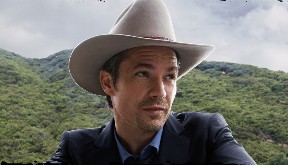 The mystery genre is loaded with thousands of gripping novels, poignant characters and solid plots.
Yet when it comes to TV and movies, very few of those wonderful novels make it to the big or little screen intact. The exceptions are so good that they become timeless classics -- Mystic River, L.A. Confidential, The Grifters, Get Shorty, Jackie Brown and a few others.
Add to that list Justified, which makes its return Feb. 9 on FX. It will air on Wednesdays at 10 p.m. ET/PT.
Justified's first season is available on DVD.
Justified is based on a Leonard short story about U.S. Marshall Raylan Givens, an old-fashioned Kentucky lawman who is a deeply flawed good man. He knows what he is. A relentless lawman, quick on the draw and usually justified in his shooting.
On the personal side, Givens' is incapable of being faithful but he's so darned charming few women can stay mad at him. However, those charms don't work on criminals and he has more than his share of enemies, which will heat up even more during this season.
What makes Justified work -- and I am so looking forward to this second season -- is that the screenwriters cull Leonard's pitch perfect dialogue. Leonard has always been able to say so much with so few words. He makes the dialogue look simple, but it's loaded with depth.
But Leonard has never skimped on action. Justified's second season begins about two hours after the first season ended so expect plenty of fire power.
Leonard currently is working on a full-length novel about U.S. Marshall Raylan Givens.
Photo: Timothy Olyphant as Raylan Givens in Justified. FX photo
get-justified-again
1786