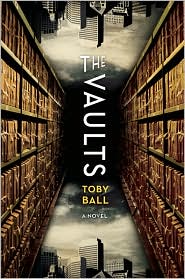 The Vaults takes place in 1932 against the backdrop of a corrupt and dangerous metropolis simply referred to as “The City.” The tale begins as Arthur Puskis, archivist of the Vault, the repository of all of the City’s police records, finds duplicate files indistinguishable to a layman, but wildly different to the eyes of an expert like himself. This discovery prompts Puskis to start asking uncomfortable questions, the answers to which point him to the mysterious Navajo Project involving criminals who simply vanish after they are convicted. Puskis doesn’t know it, but his investigations are being paralleled by newspaperman Frank Frings, and shady PI Ethan Poole. This sudden attention angers the corrupt powers behind the Navajo Project, putting everyone in danger.

I say this with great respect, as I revere the work of the legendary comic artist Will Eisner: The Vault feels like a novel adaptation of one of Eisner’s classic Spirit comics. All the classic elements are there: a dark, dank city, larger than life villains (Mayor “Red” Henry and his enforcer, Feral Basu), bizarre subplots which eventually merge in satisfying ways, the humor, the pathos, the simple humanity the sudden, brutal, shocking violence—all combining in a satisfying noirish stew.

Astonishingly, Toby Ball is a first-time novelist. The Vaults succeeds on every level, in its language, plotting, and ability to enthrall readers.