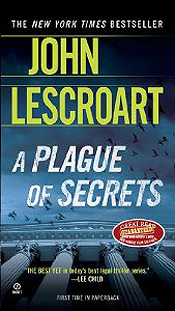 John Lescroart: A Certain Justice and A Plague of Secrets, among others -- Lescroart's series about attorney Dismas Hardy go beyond the courtroom to look at how a community deals with strife. Flawed characters, flawed ethics and a flawed legal system add up to exciting novels. In 1995's A Certain Justice, Dismas Hardy only makes an appearance as Abe Glitsky, the head of San Francisco’s homicide department, takes center stage when a race riot engulfs the city. The murder of a manager of a trendy coffee shop jumpstarts the energetic A Plague of Secrets (2009). Lescroart's latest novel is Treasure Hunt, the first of a new series about San Francisco private investigator Wyatt Hunt.
Julie Smith: Death Turns a Trick -- Before she turned her attention to New Orleans and Skip Langdon and Talba Wallis, the heroines of her two Big Easy series, Smith wrote about San Francisco attorney Rebecca Schwartz. These novels are lighter in tone than her other two series, and often quite funny. Death Turns a Trick (1992) introduced the self-described "Jewish feminist lawyer." Before my first trip to the Monterey, I read Dead in the Water (1993), which is set at the Monterey Aquarium; on each visit I always look twice at those wonderful exhibits.
san-francisco-legal-thrillers
1540