Tess Gerritsen on Rizzoli & Isles
Oline Cogdill
This is proving to be quite a summer for author Tess Gerritsen. The TNT series Rizzoli & Isles, which airs at 10 p.m. EST/ 9 p.m. CST on Mondays with encore presentations, is one of the top rated shows and it has been renewed for a second
season. 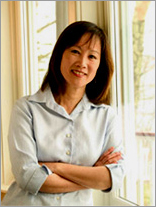 She is continuing her book tour for her latest Rizzoli & Isles novel Ice Cold (called The Killing Place in the U.K.) and, of course, planning her next novel.
We caught up with her to ask her a few questions about the TNT series, starring Angie Harmon and Sasha Alexander.
Q: Although the stars of Rizzoli & Isles -- Angie Harmon and Sasha Alexander -- don’t look like the characters as described in your novels, they make these characters work. Why?
A: It's all in the attitude.  Harmon has the character of Jane nailed down pat. If she weren't so gorgeous, she would be exactly as I created her. The TV persona of Maura has been altered for TV purposes, something that I can understand. In the books, both women are pretty intense, and Maura is a moody, introspective character.  That
might not translate well to TV. Sasha Alexander does a fine job of playing the somewhat Aspergian and brilliant character that's been written for her on TV. 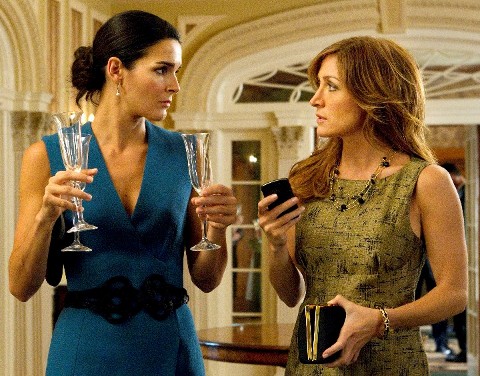 Q: Do you find yourself working an alternative universe as you write the novels yet see the characters on TV at a different point in their “lives”?
A: It is weird, continuing on with the books as I've created them, while a parallel universe spins out on TV. I'm trying to stay true to my books, because these are the characters I started off with, and to change them based on TV's influence would be too weird at this point!

Q: Aside from the characters and plot, what is your favorite detail in the TV series?
A: I love their casting choices. Bruce McGill is brilliant, and Lee Thompson Young has a real intensity as Frost.  Also, I'm utterly nuts about the theme music they play during the titles. Since I'm a celtic music fan (I play the fiddle) it was such a thrill to hear that jig played for the first time!

Q: This isn’t your first time having your work make it to the screen. You co-wrote the story and screenplay, Adrift, which aired on CBS as Movie of the Week in 1993, and starred Kate Jackson and Bruce Greenwood. Were you pleased with that?
A: That was quite a different experience, as I was actually involved in writing the script. I thought the finished product was terrific, and I've been a fan of Bruce Greenwood ever since. It was also a revelation to me how much more powerful a scene can be on-screen. I recall writing a scene where the villains hold Kate Jackson's hand overthe burner flame, and she screams. Watching it on screen took that scene to a whole different level of horror.

Q: Has the TV series of Rizzoli & Isles had any impact on book sales? And are you getting feedback from readers?
A: We're just starting to see movement in the backlist.  I know that the Amazon numbers have really improved, and I understand that weekly sales of the paperback The Surgeon have more than doubled. I'm hoping that, as more viewers realize there are books behind the characters, that they'll want to explore where the stories came from.

Q: Rizzoli & Isles has just been renewed for a second series. Will be see more novels?
A: I'm working on the ninth Rizzoli & Isles novel now.  It should be out next summer.

Q: Do you have any input into the series?
A: Not really. I'm friends with the executive producer and head writer, Janet Tamaro, so I suppose I could email her and bend her ear. But I think they know where they want to go with the series, and they don't need the novelist to give them guidance!

Q: Is there any thing about the TV series that no one has asked but you are dying to tell?
A: The amazing amount of real-world advice they're getting for their stories!  They have a Boston PD homicide detective often on-site, advising them on police work, and they have a medical examiner and coroner's assistant helping them with some of the medical details.

Q: How do the characters and their backgrounds as portrayed in Rizzoli & Isles different from your novels?
A: TV-Jane Rizzoli is very close to the book-Jane Rizzoli.  TV-Maura Isles is sunnier, friendlier, and less troubled than book Maura Isles. Also, they've given Maura a French boarding-school background and a lot more fashion sense than I ever envisioned "my" Maura having!

Q: Will we see any more Tess Gerritsen work make it to the screen?
A: One can always hope! My long-time dream has been to see "Gravity" make it to screen.  The film rights are owned by 20th Century Fox, but so far ... nothing.
PHOTO: Top: Gerritsen; Center: Angie Harmon, Sasha Alexander TNT photo
tess-gerritsen-on-rizzoli-a-isles
1530