Well, actually, not for her. She’s been married to the same man for 39 years…and happily so, she says. 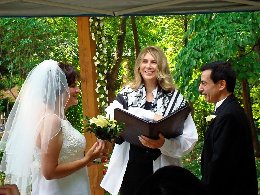 Instead, Viets presided over the wedding of Lia Hutton and Carl Nigro on June 19.

And yes, it’s legal because Viets is a minister in the Universal Life Church.

And it’s all in the name of connecting with your readers.

The Washington, D.C. couple won Elaine Viets’ “Happily Ever After” contest, designed to celebrate the wedding of Helen Hawthorne and Phil, the two lead characters in her Dead-End Job mysteries. Helen and Phil marry in her ninth Dead-End Job mystery, Half-Price Homicide.

As part of the contest, Viets of Fort Lauderdale offered to fly anywhere in the continental United States to officiate at the winning couple’s wedding. “Most authors love their readers,” Viets said. “I’m privileged to marry two of mine.”

The bride, Lia Nigro, said the ceremony “has lots of personal meaning.” Lia wore her mother’s wedding dress and her grandmother’s wedding ring. Friends made their couple’s tiered wedding cake and provided the music.

More than 30 family members and friends attended the garden ceremony.

Would Viets get into the marrying business again?

“Absolutely. Carl and Lia are such a smart, sweet couple. I have great hopes for their future,” she said. “Not sure what I'll come up with next -- but I hope it will be as much fun as this.