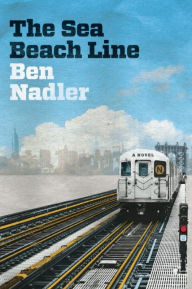 In Ben Nadler’s The Sea Beach Line young Izzy Edel embarks on a quest to find Alojzy “Al” Edel, his possibly murdered, possibly still alive father. Izzy, a drug-addled college dropout, travels from Santa Fe to New York City, where Al was a street bookseller, to find out the truth. With no place to stay and little money in his pocket, Izzy winds up sleeping on a mattress in the storage unit where his father kept his stock. After a while, he finds himself among the other street vendors hawking books in Greenwich Village, rubbing elbows with street hustlers and Russian gangsters. He dislikes his new job, but says, “Of course, becoming a bookseller was not supposed to be an end in itself, but a means to connect with Al.” To a certain extent, it works. During his continued search for his father, a rabbi reminds him of the old story about Abraham’s attempt to slay his own son to please God, but then offers a new version. That re-interpretation turns out to be a warning. The origin of this complicated novel is unusual. The Sea Beach Line began as author Nadler’s MFA thesis, then took on a life of its own, which good books are prone to do. With all its flashbacks and seemingly off-plot dips into Hasidic mysticism, Nadler’s opus is no easy read. It’s a novel to savor slowly, like fine wine, and perhaps be savored again and again.

A quest for a disappeared father leads a lost young man on a journey of used books, Hasidic mysticism, and self-discovery.