Books
Death of a Bovver Boy 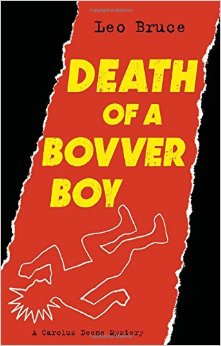 Leo Bruce is the pen name of Rupert Croft-Cooke, who wrote almost two dozen highly praised mysteries featuring schoolmaster and amateur detective Carolus Deene. Death of a Bovver Boy was the last of those novels.

“The ugliest case which Carolus Deene ever chose to investigate” is brought to him by his housekeeper, Mrs. Stick, who informs him that her husband has encountered the corpse of a naked man in a field outside of town. Before he calls the police, with whom he seems to have a rather cozy relationship, Deene has Mr. Stick bring him to the site, where he confirms the existence of said corpse and begins to gather the clues that will unmask a murderer. But before he opines on that matter, he will encounter a plethora of suspects, including denizens of the local crime underworld, members of the victim’s strange, disjointed family, and a collection of unsavory thugs and punks (whom the genteel Deene handles with surprising ease).

Originally published in 1974, this slim novel holds up extremely well. Although time has diminished its shock value, it’s still a quality read, notable for its tight, efficient plotting and memorable cast. Deene is a sturdy, durable, colorful character; you’ll enjoy his exploits here, and will no doubt want to sample previous installments if you haven’t yet had the pleasure.