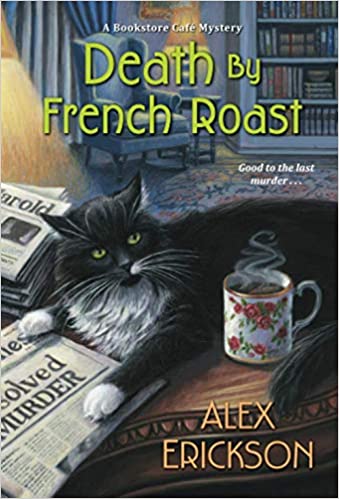 The eighth book in Alex Erickson’s bookstore cafe series, Death by French Roast, finds heroine Krissy Hancock at the funeral of her next-door neighbor, Eleanor. When she stops by after the funeral to help Eleanor’s daughter, Jane, clear out her mother’s home, she finds it stuffed with old newspapers and learns that Eleanor had a murdered brother. She never stopped looking for a solution to the 30-year-old crime, and Krissy, veteran of a few solved murders, offers to take a crack at it.

This was the first book I’d read in this long series, but I found it no problem to jump in, finding my way easily into the setting of the series, a combination bookstore/cafe, and becoming familiar with some of the more obviously established characters in no time. Erickson spent no more time than necessary on these elements, instead focusing on telling a good story.

As Krissy researches the dead man’s story, it turns out he was infamous in town for dating a much younger woman (while it’s not specified, I’m assuming the girl in question was 17 or 18), who is now a middle-aged woman, and someone Krissy knows. The feelings in town at the time of their romance apparently ran high, and few except for the dead man’s girlfriend and sister seem to have mourned his murder.

When a new murder interrupts Krissy’s first date with her longtime crush, Officer Paul Dalton (his crusty, capable mom is the police chief), things really get serious. Despite Paul repeatedly warning Krissy to let the police handle the investigation, she, like every amateur sleuth ever, does not, and of course ends up capturing the killer after untangling a nest of old resentments and secrets. This was a brisk, well-told, completely enjoyable tale.