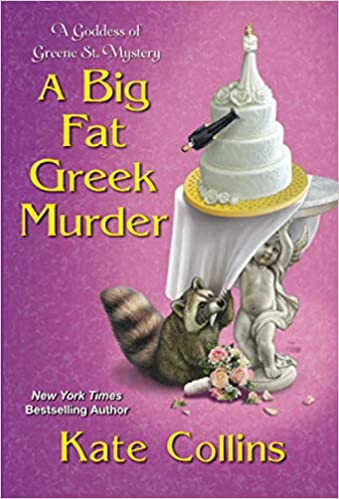 I enjoyed Kate Collins’ A Big Fat Greek Murder, set on Michigan’s beautiful west coast. The main character, Athena Spencer, has moved back to her mom and dad’s home along with her nine-year-old son as she recovers from a marriage gone south. The family is the other main character—and there are many of them, loud, supportive, bossy, and nosy. As the book opens, Athena turns up at a rehearsal dinner being held at her family’s restaurant, serving the dual purpose of being there for her sister, Selene, who is in the wedding party, and helping the family out. All of them are waiting anxiously for the groom to arrive.

As this is a mystery novel, it’s no surprise when the groom turns up dead, sadly stabbed with hairdresser Selene’s scissors. When Selene is arrested and charged with the murder, the whole family mobilizes. Athena’s love interest (she’s the only one uncertain on that score) Case, who was introduced in the first novel, helps her to run an unofficial investigation, jammed around Athena’s job at the family garden center and her other job as a full-time mother to a nine-year-old. She’s also a blogger whose anonymous take on her own big, Greek family life runs online as It’s All Greek to Me by Goddess Anon. These gently snarky posts, interspersed throughout the book, really flesh out Athena’s personality and add spice to the book.

The unpeeling of the wedding party’s motivations and various connections to one another by Athena and Case turns up a healthy list of likely suspects. The questioning of the wedding party neither clears nor convicts Selene, though there’s lots of evidence pointing to her guilt, and Case and Athena work against the clock (i.e., a grand jury date) to set her free. This was a well-paced and funny book surrounded by a believable and colorful family, enriched by the Lake Michigan setting. The setup at the end for the next novel presenting a path forward for Case and Athena made me eager for more. Bravo!