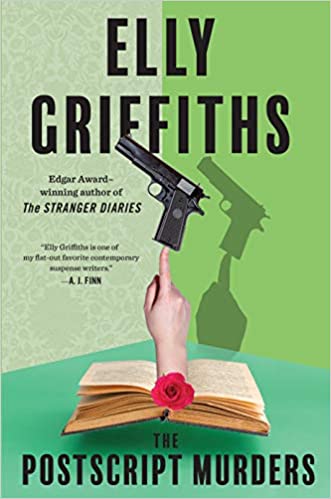 I’m an unabashed Elly Griffiths fan, but even with high expectations, The Postscript Murders is a standout. So much fun, so delicious, so cleverly assembled, it’s the followup to last year’s Edgar winner, The Stranger Diaries, and it shares the same lead character, DS Harbinder Kaur—though the tone is quite different. Whereas the previous was a little ominous, a little gothic, and a bit creepy, this book is more of a caper, with the added benefit of emotional resonance.

As the book opens, the very elderly Peggy is discovered dead in her favorite chair at the window by her caregiver, Natalka. From the book clutched in Peggy’s hands, falls a card: it says Mrs M Smith, Murder Consultant. What’s more, Natalka notices that most of Peggy’s books are crime novels, and that all of them are dedicated to Peggy or thank her in the acknowledgements. It’s odd enough to prompt Natalka to consult DS Harbinder. And thus begins a thoroughly wonderful mystery based on the thinnest of premises, really. But somehow the charm and magical qualities of Griffith’s storytelling make it sing.

Natalka’s search leads her to Benedict, a former monk who is now the owner of the nearby coffee shop, as well as Peggy’s neighbor, the elderly and charming Edwin, who used to work for the BBC. Edwin and Peggy had spent many happy hours talking books. But when Natalka and Peggy’s son are held up at gunpoint in Peggy’s apartment—over a book—she really develops what Griffiths refers to in her novel as “detective fever.” (It’s a quote from The Moonstone.)

While Harbinder is officially on the case, the action really involves Natalka, Ben, and Edwin, who become increasingly fond of one another over the course of the story. When a famous local author is shot dead after having a drink with the trio one night (he had also thanked Peggy in his acknowledgments), the three tear up to Aberdeen and a crime writing festival to follow a lead. Then a third death occurs at the crime festival and Harbinder is summoned to Aberdeen, finally bringing all four together. Harbinder finds herself both amused and annoyed by her three amateur “partners.”

The cleverly laid clues are spaced throughout The Postscript Murders and the deaths ultimately appear to be linked. The pace of the narrative is relentless, but perfect. The tone is neither too light nor too heavy. The language and the storytelling are intelligent and witty.

There’s also a poignancy to this novel that never veers into cheesy sweetness. Some writers have “the touch”—while the stories they tell might technically be unbelievable, the way they tell them make them absolutely right. In her 18th novel and second standalone outside of her Ruth Galloway and Stephens and Mephisto series, Griffiths’ sure hand and confidence as a writer—as well as the sheer joy she obviously has in writing her books—makes reading her work a pure pleasure.