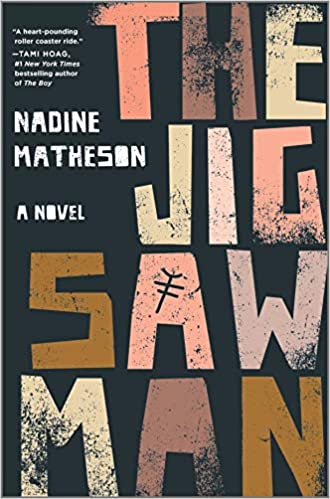 In this engrossing thriller by British newcomer Nadine Matheson, we are introduced to serial killer Peter Olivier and intrepid Detective Inspector Anjelica Henley. This interesting pairing is reminiscent of Thomas Harris’ Hannibal Lecter and FBI agent Clarice Starling, but is a complex mixture all its own.

The Jigsaw Man skillfully maneuvers us through London, a city of CCTV cameras that sometimes catches a killer in the act. Laced into the plot are layers of subtle and not-sosubtle racism. The book begins with a copycat killer, who, like Olivier, enjoys cutting his victims up and displaying the body parts like a puzzle that needs to be put together. It sounds more gruesome than it reads.

Very soon, Henley and her new trainee detective, Salim Ramouter, head for the High Security Unit of Belmarsh prison to question the notorious Olivier about the copycat case. Charming as always, he tries to dominate the conversation, but Henley, who put him in prison, isn’t playing his manipulative game. She’s got plenty of problems of her own from a grieving withdrawn father to a husband who threatens to walk if she doesn’t quit the police Serial Killer Unit. The frustration of DI Henley grows when Olivier escapes, and now two killers are gruesomely competing for her attention.