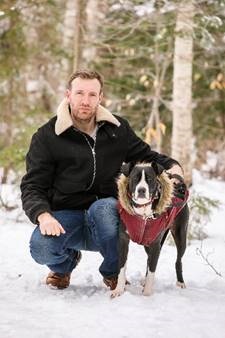 Last summer, author Owen Laukkanen started Project Puppies. The plan was that he and a friend would drive across Canada, finding dogs that needed rescuing with the goal of finding them forever homes.

But summer turned into winter and now Project Puppies is a year-round mission.

To date, Project Puppies has rescued 71 dogs and one cat. That includes four or five litters of puppies and one pregnant dog who gave birth shortly after the rescue mission. They have all found homes or are in the process of being homed.

He also is chronicling the rescues in the blog Project Nomad.

“The germ of this first trip came when my friend Alexis Tanner and I learned that animal welfare agencies in our area were having a hard time accessing dogs in need of rescue,” Laukkanen wrote in an email.

“The agency from whom I adopted my dog Lucy, Raincoast Dog Rescue Society, typically brings animals from across Canada and the United States, as well as Mexico and as far away as Lebanon and Africa. But due to travel restrictions around the coronavirus situation they were unable to fly with dogs,” added Laukkanen.


“Sensing an opportunity for adventure, and to do something good in the midst of the pandemic, we half-jokingly offered our services as drivers,” Laukkanen said.
Raincoast Dog Rescue Society “to our surprise and delight agreed.”

Laukkanen is proud to note that the rescue agency said this has been the most successful year in Raincoast's history.

“There has been just incredible interest in all of our dogs,” he said. 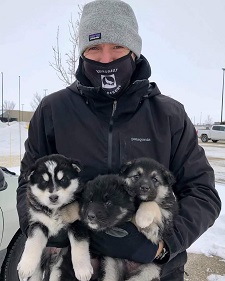 Project Puppies began at the end of May as the two friends planned a rescue mission to remote northern Saskatchewan, 1,150 miles from their home.

Their destination was the Little Red River Reserve near Prince Albert, Saskatchewan, where they met with a team of local animal rescuers. There, they rescued their first seven dogs. Subsequent dogs have come from native communities across northern Saskatchewan and also Bella Bella, British Columbia.

They partnered with First Nations communities and with frontline rescue workers to find at risk dogs and get them homed. They also arranged for spay/neuter and return programs where they will take family pets from those northern communities and get them fixed at no cost to the owner and brought back to prevent more unwanted puppies being born. They also distributed multiple bags of dog food to families in need.

“It goes without saying that we couldn’t have done any of this without the partnership of the Little Red River Cree Nation, whose members welcomed us onto their land and helped us look for animals in crisis,” Laukkanen said.

Working on the reserve for about six hours, they packed their truck with seven dogs and one cat and immediately set out to drive back to Vancouver. “We drove nonstop through the night, and after about 24 hours on the road and a few chaotic potty/meal breaks, we’d arrived back on the coast and were delivering the dogs to Raincoast,” Laukkanen said.

Each of the animals they transported were dealing with a number of health issues from fleas and (many, many) ticks to upset tummies to broken bones and signs of abuse. “But, they were all heartbreakingly lovely, tender and trusting dogs who warmed to us very quickly, despite the hardships they’d obviously suffered.

“It is truly, truly overwhelming to watch dogs you’ve seen crippled by fear and pain start to flourish and come into their own as happy, carefree animals, and I’m so grateful to have the opportunity to take part in this mission,” said Laukkanen, adding that those animals quickly received medical attention and were places in foster homes. The dogs are either now with permanent families, or awaiting adoption. 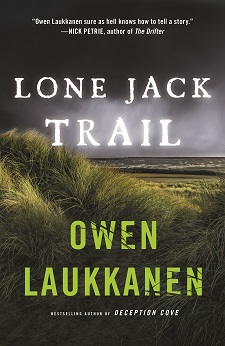 Laukkanen’s pet project coincided with the publication of his newest novel Lone Jack Trail, the second in his excellent series about former Marine Jess Winslow, ex-convict Mason Burke and Lucy, Jess’ rescued service dog who is the glue that holds together the couple.

Set in Washington State, the series delves deep into these fragile characters with action-packed plots about redemption, survival, fresh starts and sacrifice.

In my review, I also said “Lone Jack Trail is rich storytelling at its best—and with a really great dog. This is a series that will only get better.”

The Jess/Mason/Lucy novels will be continuing and the rescue project has given Laukkanen fodder for the series’ third installment. “I do plan to set the next Deception Cove/Lucy book around a rescue mission like the ones I've been going on!” he said.

“The dog stuff has taken up a lot of my writing time, as has just general 2020 distraction, but I have a young adult novel coming out in January and after that I'm planning to set my course on another Lucy book,” he said.


Special dogs
Some of the rescues are memorable, such as Toby, who had an injured leg that had to be amputated. “But Toby has been adopted into a wonderful home and seems to like being a tri-paw just fine,” Laukkanen said. And then there was Rosie, who was days from death with severe mange. “I had to feed and water from my hand and who is now recovered, happy and energetic and currently up for adoption,” he added.

And a couple of dogs ended up in homes Laukkanen personally knew. His best friend, Alexis, adopted a dog named Bentley from their first rescue mission. Bentley had health issues but is now thriving and has become best friends with Laukkanen’s Lucy who is also a Raincoast alum.

So far, Laukkanen has resisted adopting a second rescue. “I don't know how I haven't adopted a bunch of our other rescues myself; every batch there is at least one where I seem to fall in love,” he said. 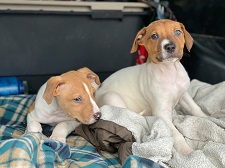 Of course, there’s still time for him to add another dog to his home.

Project Puppies will get started on more missions in January. “We already are planning our next rescue mission; we’re addicted now,” Laukkanen added.

“There are no shortages of dogs who are still needing rescuing, especially in the cold winter months,” he added.