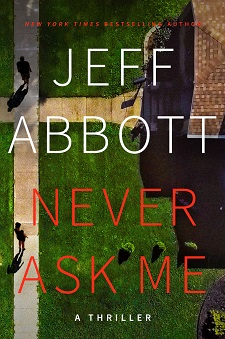 The importance of location in mysteries can never be stressed enough.

Mysteries that give us a sense of place make that area—be it a city, region or country—a true character that effects the plot and the people who inhabit the story.

And that place can vary from author to author. Michael Connelly’s Los Angeles is different from Robert Crais and a different city than that of Denise Hamilton or Rachel Howzell Hall or Steph Cha. And these different visions make for more involving novels.

But sometimes it’s the location that is the constant as different characters inhabit the landscape.

The novels have focused on different families but Lakehaven has remained the constant. While Lakehaven doesn’t change, its influence affects Abbott’s characters differently.

Abbott’s latest novel Never Ask Me, which also is his 20th novel, shows the secrets that run rampant through Lakehaven.

Never Ask Me revolves around Iris and Kyle Pollitt and their much-loved teenage children, Julia and Grant, whose lives are changed when their neighbor Danielle Roberts is murdered; her body found in a neighborhood part. An adoption consultant, Danielle had facilitated many neighborhood couples seeking international adoptions, including the Pollitts.

In Zoom book event a couple of months ago, Abbott discussed his use of Lakehaven, which is fictional though based on a composite of several Austin neighborhoods. Abbott said the use of Lakehaven allows him to show “a spectrum of all kinds of people.”

But he keeps it simple so the location resonates with many readers, he said.

And the real residents of Austin have picked up on Lakehaven. “People in Austin argue which neighborhood is the fictional Lakehaven,” he said.

Abbott is not telling.

LISA UNGER
The Hollows, a quaint fictional town outside of New York City that seethes with family secrets and rife, has been a long-time background of Lisa Unger’s novels. 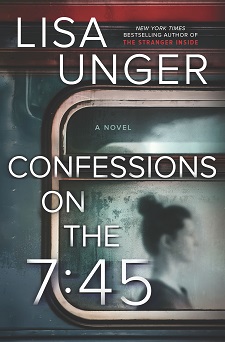 In an interview for Mystery Scene, (2012 Summer issue, No. 125) Unger explained The Hollows, which played prominently in Fragile (2010) and Darkness, My Old Friend (2011). Also, In the Blood, Crazy Love You, The Whispering Hollows, and Ink and Bone.

“At first The Hollows was just a place where the story was happening. It was not dissimilar from the place I grew up, but it was kind of a dreamlike combination of where I grew up and what might have been the place. The Hollows has an energy and in some ways an agenda. It’s not malicious but it also isn’t benevolent. The Hollows encourages paths to cross,” she said.

Although she has set some novels elsewhere, Unger often returns to The Hollows. “I definitely will return to The Hollows and I don’t say that lightly. I already know what will happen next there.”

In another interview, Unger said that “The Hollows keep calling me back.”

Unger also writes about The Hollows on her web site.

Unger’s latest novel Confessions on the 7:45 is set in New York City. The plot is jumpstarted when Selena Murphy Selena finds a seat on a train next to a woman who calls herself Martha. She feels an instant connection to “Martha” and the two start spilling secrets. Selena reveals that her husband is having an affair with their nanny while Martha is having an affair with her boss.

“Sometimes a stranger was the safest place in your life,” muses Selena Murphy, whose encounter with a stranger on a train leads to a vortex of pain.”

Of course, nothing is safe in an Unger novel.

And despite the New York City setting, Unger works in a mention of The Hollows, which will thrill her readers.

The area has fit well will with the criminal enterprises that have thrived in this region, especially with the violent Burroughs family who have controlled the area for generations.

Consulting on a brutal murder in a Jacksonville, Florida, he and FBI Special Agent Roselita Velasquez begin an investigation that leads back to the criminal circles of his own backyard.

Prefecture D is a quartet of novellas set in 1998. Through these four tales, Yokoyama explores moral ambiguity, interdepartmental police politics, ethics, investigations and the various motives of the police detectives.

The four novellas in Prefecture D are written as if they are stand-alones but the connective tissue links each to the next.

Yokoyama first found an audience with Six Four, about a cold kidnapping case that shed light on police corruption in Japan. Six Four unfolded over 14 years and clocked in at 576 pages.

It sold more than one million copies in Japan before being published in the U.S.

TANA FRENCH
The fictional Dublin Murder Squad was the setting for Tana French’s first six novels, beginning with the award-winning In the Woods. That 2007 novel won the best debut crime novel category for the Edgar, Anthony, Barry and Macavity awards.

Each of those first six novels focused on different detectives and how their personal lives affected the investigations.