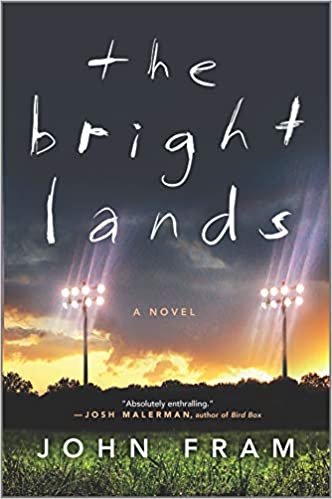 A former star returns to the hometown he tried to move on from, finding trouble. A small Texas town is dangerously obsessed with high school football. Two familiar tropes—the latter thanks recently to Friday Night Lights (the excellent book, film, and TV series)—that in the hands of debut author John Fram are given a fresh and exciting spin in the atmospheric, disturbing tale The Bright Lands.

Dylan Whitley is the star high school quarterback in Bentley, Texas, carrying the hopes of the town on his sturdy shoulders. Billboards on the road into Bentley tout him as “the boy with the million dollar arm.”

But it is a “rotten rind of a town” in the eyes of Dylan’s older brother, Joel, who escaped a decade before and is now living a successful, party-filled life as a gay man on the verge of 30 in Manhattan. Free at last, after being uncloseted and shamed out of his hometown, Joel never wants to go back to Bentley.

But when a text conversation between the brothers bothers Joel, he makes a reluctant return, opening up old wounds, only for his little brother to vanish following a weekend trip to the coast with friends.

What is going on in Bentley? Sheriff’s Deputy Starsha Clark knows all too well the pain of a missing brother. Dylan isn’t the first Bentley Bison football player to disappear. Troy Clark was never found. An uneasy pairing, given they dated in high school and all that’s happened since, Joel and Starsha search for the truth behind Dylan’s disappearance, poking into the town’s dark secrets only to find a nest of rattlesnakes in human form, mean and deadly, and something that may be beyond understanding.

With The Bright Lands, Fram announces himself as a tremendous new voice in thriller writing. There’s poetry in his prose, and he expertly weaves in queer issues and gothic sensibilities into his small-town noir. The dash of supernatural doesn’t overwhelm—it’s finely balanced and fitting à la the thriller novels of Michael Koryta and John Connolly.

This is an excellent tale soaked in atmosphere, that takes readers into some disturbing places as it examines small-town life and queer experiences in rural America, and explores a variety of perspectives on the tensions and toxicity that can hide within high school sport.